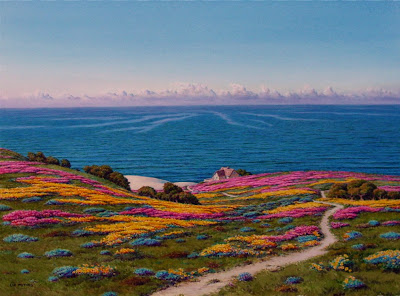 This is spring on New Island, an inspiring
time of year for a new civilization!

Within a few months, most of the convicts from the Lady Marie (and later the Closter) saw this place as a possible new Eden. They found that this island was not only uninhabited but also quite livable -- with adequate fresh water, timber for shelter and an agreeable climate.

Many meetings were held that seemed to go on forever. Captain Hayes realized that none of the guards, crew nor he could "command" 700 pissed-off women--women who had largely been abused or otherwise caught up in a harsh legal system designed by and for the men of England! Hayes intuitively felt that Cecelia could be a leader, and declared that she be in charge.

In the weeks following the first shipwreck, spring had arrived, and the wildflowers, green grass, and warming weather enlivened some spirits, but there was a much resentment between nearly all the women toward their erstwhile keepers. And the the guards and sailors began to seethe against Capt. Hayes, Cecelia and a few of the other "enlightened ones". Several of the older women had brought memories and skills of ancient Gaelic and Celtic spiritual traditions, healing methods, and ways of living together that far preceded the Judeo-Christian England of that time. During the long voyage, Cecelia encouraged these gals to share their 'secret' stories of work and play common in Europe 5,000 years ago! When Cecelia asked these women to address a general meeting of all the women, the 'healers' were jeered by the world-weary streetwise crowd: Renounce Christianity? Bring back witchcraft? And when the men heard of these ideas, The captain had all he could do to keep order!

But then there was a shift--it came slowly as the wheels began to turn in many minds.

Next: the Old Way and the Otter

Posted by Unknown at 7:00 PM No comments: 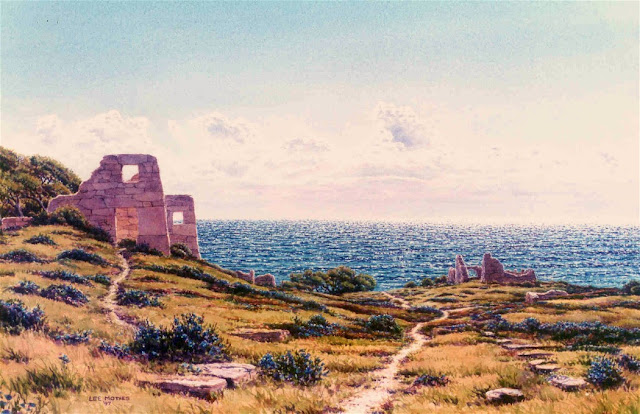 The convicts quickly discovered ruins like these,
and believed the island was occupied.

Almost immediately, the new arrivals noticed stone structures on the bluffs overlooking Beastey Bay, and were certain that local inhabitants would swoop down on them, Like a cloud of locusts! Capt. Hayes mustered the guards to explore the surrounding hills and report back any sightings of 'indigents'. To everyone's relief the exploring party came back unharmed, and reported that all the buildings were long abandoned, and there was no sign of any recent human habitation!

More thorough digging in later years has revealed that the hilltop ruins were built by a prosperous and intelligent population. The oldest signs of habitation, found in some caves on the island's eastern coast, date back to 41,500 years BCE, according to carbon dating techniques. Known locally as the "Old People", this pre-European civilization left impressive stonework buildings, harbors, roads, fortress walls, and several curious platforms at the ocean's edge before disappearing about 800 years ago!

They also left a lot of mysteries, which the Antiquities Institute at Putney University has dedicated itself to unravel. Who were the Old People? What happened to them? Was it drought?, disease, war, or all of the above?

Next: Reinventing Civilization
Posted by Unknown at 9:00 PM No comments:

The Storms that Changed History

In the south Indian Ocean, the 'Roaring Forties' won the name by the ferocity of the frequent storms that sweep this region at roughly 40 degrees south latitude. Anyone sailing eastward in these latitudes made good time but there was a risk!

It was by chance on August 6, 1799 that the Lady Marie and the Swallowtail ran into such a storm. August is late winter in the Antipodes, and it is one of the worst months for storms. This one blew both ships northeast onto the broad beaches near Beastey Bay on New Island's southwest coast. It seems that sailcloth from a snapped mast on the Lady Marie fouled her rudder, and the ship could not steer. Swallowtail was forced to follow her lights and both ships were eventually caught up in huge surf and driven aground.

As the tide lowered and the wind let up, the convicts, crew and guards all found themselves on an entirely new land, not located on any of the captain's charts! The ships were both badly damaged and hopelessly stuck in the sand but still intact. The Swallowtail was by luck a Colony Supply Vessel loaded with tools, building materials, seeds, foodstuffs, cloth, and a library of books from how-to manuals to classic literature.

As soon as the tide receded, Captain Hayes ordered everyone to abandon both ships and remove everything salvageable before the next tide came in. Once everything was on the beach, the entire group fell into an exhausted sleep behind the dunes. And a good thing: both ships were reduced to splinters after another night of pounding by the waves.

Almost four years later, in July 1803, the convict ship Closter ran aground in thick fog and heavy surf not far from present-day Palmer, about 18 miles from the 1799 wrecks. Again, quite by chance, the Closter carried 377 female convicts along with guards, crew and supplies. Due to mishandling of lifeboats, the captain and 21 of the crew were lost. It seems they were in such a hurry to abandon ship, they were dashed upon the rocks in the few lifeboats that were available. The rest were forced to wait out the tide, which dropped low enough so that most of the women were able to wade ashore. 13 were lost.

A hunting party from the Lady Marie had set up a camp in the nearby dunes and heard the shouting. They managed to rescue the survivors and, over some days, escort them back to the now established settlement of Beasty.

This uncharted island now had a population of over 900, by far the majority of which were women!

Posted by Unknown at 9:11 AM No comments: 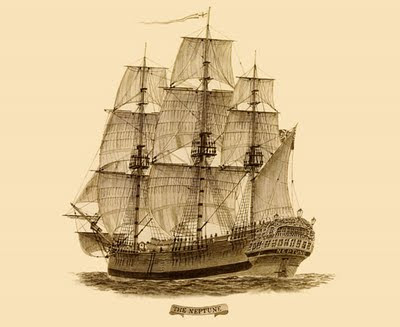 The Lady Marie was a similar to
the convict ship Neptune, above.

Aboard the Lady Marie somewhere in the south Indian Ocean, a week out of Capetown...

A young woman named Cecelia O'Hassett was hauled in front of the ship's captain to explain a fight that had broken out during the daily deck outing. It seems Cecelia had intervened in an argument and wound up attacking a guard. "I's only tryin' to get 'um to get along, but young Frieda hit me, so I hadda teach 'er, and then this bloke (nodding to the guard) came onto me..."

Hayes had seen this O'Hassett woman before and was impressed by her charisma (and ferocity) among the prisoners. He needed someone like her to help keep order among the women, and to act as a go-between with the guards. The guards, all men, were as indifferent as they were clueless to the needs or their female charges; and so morale, fighting and sickness were becoming a real problem. When Cecelia was brought before him, Hayes dismissed the guard, and offered a meeting over tea, which surprised Cecelia, who thought she was in for a flogging!
Captain Edgarford Hayes, a single man, was a conscientious student of the Enlightenment and on the younger side of 40. As the master of the Lady Marie, he was determined to deliver as many of his cargo of convicts to Australia in reasonably good health, as was possible. He had heard of the sickness, brutality and high death-rates aboard other such ships such as the Neptune.
Cecelia, it turned out, was raised in an educated household, but became a troublemaker in her early teens, and was sent to a workhouse by her stepfather. (Her father had died when she was nine.) Cecelia soon saw the inequities of British society in the Eighteenth century, and was upset by the harsh treatment of peasant families and women. In fact, she had earned her seven-year sentence in 1798 by, among other offenses, marching naked through a Ladies' High Tea on the lawn of an estate outside Liverpool. The local court recorded that she was protesting "the Hideous Practice of allowing Women to own Nothing at All!"

Captain Hayes promoted Cecelia to "prisoner liaison" and gave her freedom of the ship. After a while the women trusted her, or at least respected her, but some held that she was a turncoat. She was eventually able to win at least a nod of praise from the guards since she was making their jobs much easier.

After a few more "tea meetings" and then long dinners every Tuesday night, it became apparent, but never openly admitted, that the captain and Cecelia were more than associates...
Posted by Unknown at 8:08 AM No comments: 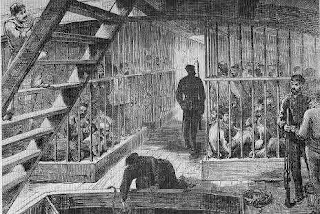 Conditions aboard a typical convict ship on its way to Australia.
Picture courtesy of Dulwich Hill Public School.

Many of us know about the convict ships that sailed from England to Australia beginning in the late 1700s to well into the 19th century.

Around 1780 the English came up with the expeditious idea to not only save money housing those convicted of petty crimes in expensive prisons, but to use their (free) labor to tame the Australian wilderness and develop the newly discovered continent for settlement! For decades, these "Undesirables", as they were known, were shipped by the hundreds under miserable conditions to ports in Australia and Tasmania, by the now well-known "Roaring Forties" trade route across the southern Indian Ocean. Most of the convicts were men, but about one in three of these ships carried women.

In 1799, The convict ship Lady Marie left Liverpool, England carrying 380 female prisoners on its manifest (no males), a crew of 42 as well as 82 soldiers-as-guards (all male). The supply ship Swallowtail carried a crew of 31 and enough supplies to begin a small settlement.

Next: Cecelia O'Hassett and Capt. Hayes
Posted by Unknown at 11:18 AM No comments:

Historical note 2, The Great Europan Explorers all Missed It! 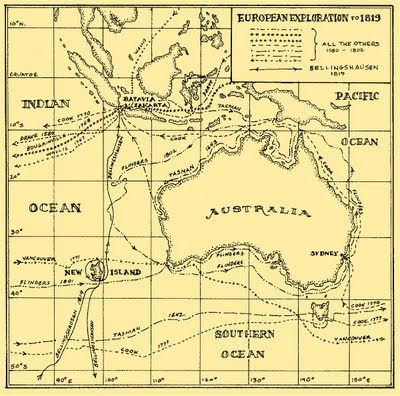 Though quite large, New Island managed to remain undiscovered until the 19th Century. The Portuguese were the first Europeans to sail into the Indian Ocean in the late 15th Century, followed by the Dutch who eventually discovered parts of Australia and Tasmania. They soon learned that once they rounded Africa's Cape of Good Hope, they could make good time by using the dependable Roaring Forties trade winds, which normally kept them far to the south of the island.

Soon, naval and merchant ships from Spain, France, Germany and Britain, as well as a few pirates, learned to use this well-known sea lane. For 190 years these ships passed within 200 miles of the island's southern coast, and not a one charted or laid claim to New Island.

But one came close: In 1791, George Vancouver (or some of his crew) may have sighted the 3500-foot-tall ramparts of North Cape as their ship was hauling east toward the Pacific Ocean. A mate's diary claims Vancouver had penciled in the notation "mountainous island" on his chart, but the chart has since been lost.

Next History Note: Discovery by Convicts

Posted by Unknown at 8:23 PM No comments: 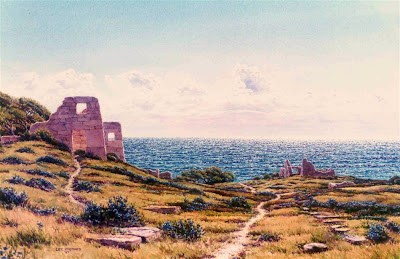 Old people ruins at Beatty Point, on the island's dry northwestern coast
New Island was uninhabited when Europeans arrived in 1799. The first settlers soon found out, however, that the island had once supported a vigorous and creative culture for probably thousands of years. These people were excellent stone masons who left impressive roads, castle-like towers, towns and harbors all over the island. These ruins gave the newcomers a chilling feeling that someone might still be here--but in fact they had all gone.

Research by the University of Putney Antiquities Department indicates the Old People left the island some 800 years ago. There are no signs of war or violence in their demise, they just simply left. The most likely cause could have been a drought coupled with a medical disaster. We just don't know.
Posted by Unknown at 8:29 AM No comments: