As the train rolled into Irian, Alan was impressed by the architecture here. The train slowed as it followed a city street to the elegant stone-and-brick station. The shops, lodgings, townhouses, as well as the train station, had a humble early-20th-Century-European-Modern look to them. The brightly painted trimwork gave off the sense of a faded resort town.

Jeremy, suddenly awake, said, "Ah, we're in Irian. You know, this town is worth seeing. It was once the playground of the Russian military elite and other VIPs who wanted to rest in the sun. Since Independence, the place has become very quiet, and is literally half deserted! I grew up here, and I remember how busy it was when the Russian fleet visited, especially back in the '60s. We could sure use some fresh energy. If you ever want to come back and open a hostelry, there are cheap places galore, even at the beach!"

"Faramond," Alan replied. "Alan".
He was afraid Jeremy might hug him, but he offered Alan a card instead. It read "Jeremy Luanne, historian" with a telephone number.

"Thanks for the card, and, ah, the same to you," Alan fumbled.

"Look me up next time you come this way", said Jeremy, and he got off.

This was a 15-minute stopover, so Alan got off as well, and walked the length of the platform, then went into the ornate waiting room, found the toilets, then bought a coffee at a tiny lunch counter. Out on the street, a few departing passengers were walking away with loved ones, and Alan felt another pang of isolated sadness.

The train's horn sounded two short toots, and Alan reboarded.
Posted by Unknown at 10:14 AM No comments:

20: Brandonbeach to Palmer to Irian

From the train, Alan began to notice that everything was connected by footpaths. He saw quite a few people walking, or pushing strange-looking carts, or riding bicycles. He also saw groups of  young kids, walking or on bikes, out on the paths far away from any houses, with no adult supervision!

The train gathered speed beyond Brandonbeach, and continued into a hilly valley and then back onto the shore, now among gentler slopes. The hills were quite pretty, with no roads or houses to be seen. Alan did notice an overland path off toward the beach, occupied by quite a few travelers on foot or bicycle.

At Palmer, a few people got off while the mail bags were exchanged. Alan noticed there was now a road alongside the railway again, but it was mostly used by foot and bike traffic. The train rounded another saltwater bay, and a sign said "Broken Bay Walkers' Lodge", pointing to a shingled building down on the beach. Near the lodge, the bay was busy with sailboats and kayaks.

The train then pulled up at Beachwoods, an abandoned-looking subdivision of weed-filled streets but no houses. As a couple of passengers got off and then on, Alan studied the one modernist building with large windows and murals painted on it - very artsy, he thought. He noticed a few people with drawing pads relaxing out front - an art class? He figured it must be an art school or artists' retreat or something - a hopeful sign that the arts are healthy here! The train moved on.

Between Beachwoods and Irian, the waves broke further offshore, crashing in long white lines before reaching the beach. Alan noticed that Jeremy had dropped off to sleep, his mouth open and snoring softly. A good time to read for a bit. 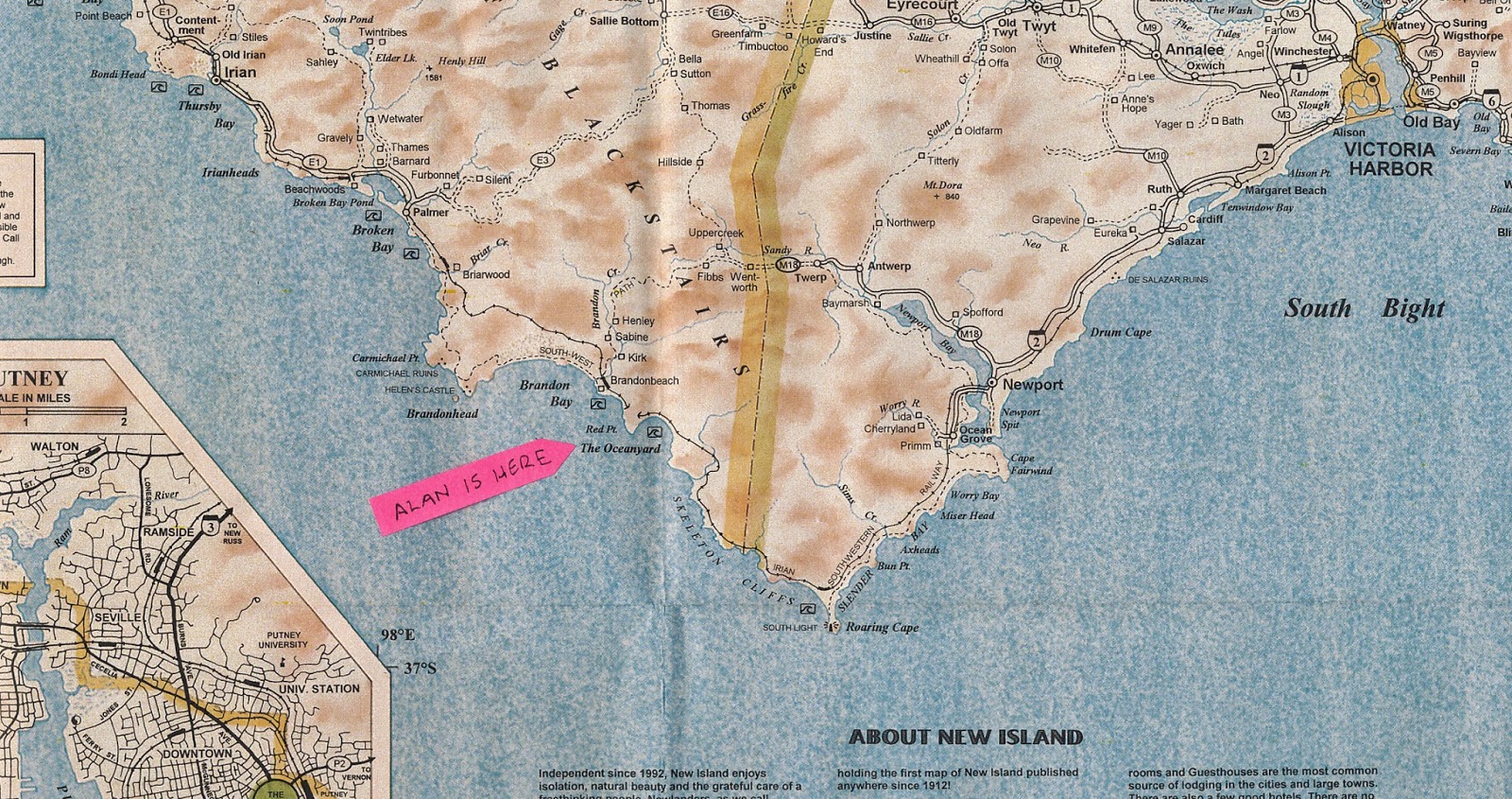 Once the train rounded Roaring Cape, Alan felt almost dizzy when he looked down. The tracks seemed to cling about halfway up a very steep slope, chewed and clawed at by the huge waves crashing below.

"See, what did I tell you?" Jeremy piped in, "The waves are big today, and they are usually the biggest on this stretch of coast...sometimes 30 meters or more! We'll come to a place called the Oceanyard where the surf churns and erupts in all kinds of wild configurations. Sometimes they have to close this line because of rocks on the tracks, tossed up by the waves."


Just then the train slowed down, but kept a steady pace along the winding stretch of track. As it approached a long tunnel ahead, beneath Red Point, Alan saw some unusually large waves ahead that looked high enough to reach the train. And then, whump! A good size breaker hit the seawall next to their car and splashed against the windows, momentarily obliterating everything. He cringed as he heard bits of stone clattering against the glass. After the splash, more swells that were just plain huge lined up one after another, heading for the train...

Then they were in the tunnel, just in time!

Alan was thrilled by the ocean's energy, but Jeremy looked a bit bleached. "Well, I think that's over," Alan said. As they emerged from the tunnel, the waves were less ferocious, and the train soon pulled into a settlement called Brandonbeach, the first town since Ocean Grove.

After a slowdown to exchange mail bags, the train continued, and as it picked up speed, Alan noticed a few smaller settlements tucked among trees by a creek. "Oh, how I'd love to hike up there and explore those villages," he told Jeremy, who yet looked pale and had said nothing more since the wave incident.

Alan noticed no towns or houses for quite a while, only larger hills covered with deep green grass and low scrub, edged at the ocean by an undulating line of sand dunes. Then he noticed houses ahead.

In the Newport Station, Alan hopped out and bought a bottle of root beer at a kiosk. The train had paused here for ten minutes, and most everyone got off to stretch.The town of Newport rests on narrow sloping land between a huge and steep sand dune and the bay, offering a dramatic view of Newport Bay and the Hills of Blackstairs beyond. The dune shelters Newport from the often blustery Southern Indian Ocean winds, but encroaching sand has lately become a problem.

Soon they were on their way again, and within a short while Jeremy, proclaimed, "Ah, that would be Roaring Cape ahead, almost an island attached by a sandy isthmus."

"Yes, I can see that," Alan muttered.

The train stopped at a cement platform marked ROARING CAPE, a flag stop according to the schedule. A pair of backpack-laden women got off and Alan watched them head up the slope toward a scattering of  huts and tiny houses. "Aahhh, said Jeremy, "They would be members of the Hermits, who build their own shacks all around this cape, and never hold regular jobs. They just keep to themselves, scattered over these hills. No one bothers them, you know, because all this land is held in common - did you know that?  Their only way in or out of here is to ride this train, or to have a long walk."

Alan thought that he'd like to be a hermit and get off here right now.
Posted by Unknown at 8:47 AM No comments:

Some time later, just after his ticket was punched, Alan's seatmate informed him that they had just passed the De Salazar ruins, built by the mysterious Old People. Alan thought he saw a stone tower off toward the bluff, but he wasn't sure. The guy continued chatting, "Those Old People built towns and towers and roads all over the island, even a harbor way up north, all out of  hewn stone. We have no idea what happened to them, they seem to have simply vanished some 800 years ago."  Alan tried his best to listen, but he also wanted to look at whatever passed by.

Near Drum Cape, the train continued toward Newport. Alan noticed the emptiness of this coast. A narrow blacktop road connected a house or two over miles of sandy but mostly green landscape. He wanted to read his book, but his seatmate carried on...

"I should probably tell you my name is Jeremy," the man said.
"Well, hi, I'm Alan. Pleased to meet you."
"And I gather you're not from around here, am I right?"
"Ahh, yes, I mean, no, I'm not - I'm from the States, er, the United States..."
"Ahhh." Jeremy sat back. "I don't believe I've spoken to an actual American before. This is quite extraordinary. You see, we hardly ever see tourists from further away than Australia, though I've talked to a few Russians and Japanese travelers, who are usually related to our locals who came from those places. Do you have anyone here?"

"Uh, no, I'm just here on a sketching assignment...I'm doing a series of pictures for a guidebook. It's for the Ministry of Trade. And what do you do, may I ask?" (Alan remembers to initiate...)

"Oh, I'm going to visit an old friend in Irian, an annual trip. We've known each other for years, and I have found it best to visit only occasionally, if you know what I mean. Your assignment sounds interesting, by the way!"
"Oh, yes," says Alan. 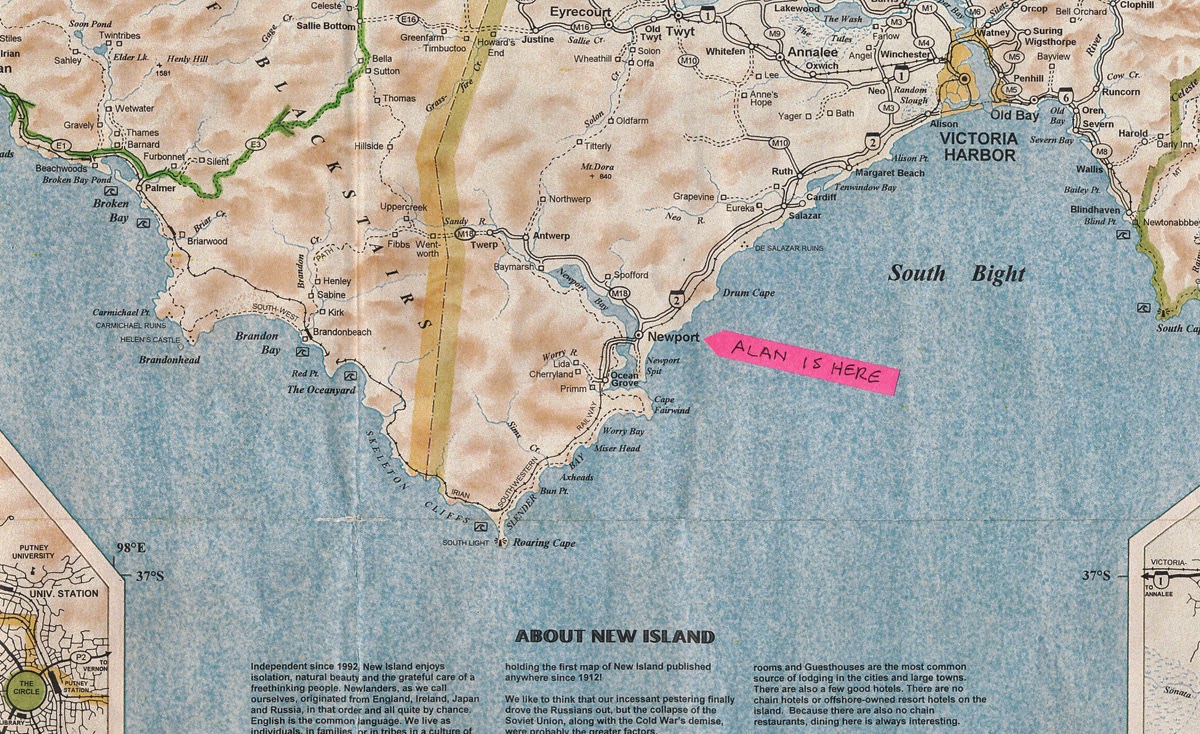 Posted by Unknown at 8:46 AM No comments: