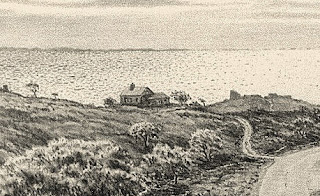 Bert was not alone at Alan's house...
While Alan was at the land office, Bert the Parrot took the day to explore his new household. In each room he found at least one nice perch with a full view of his surroundings. He also found signs of a predator - and knew that somewhere a cat was lurking. Bert has a keen sense of smell, and there was the obvious evidence - a bowl of cat food in the kitchen, near a little flip door to the outside. Bert had been around cats before, so he knew.
After eyeing the kitchen for a while from atop the cupboard, Bert flew down to sample some of the cat food, since Alan hadn't got around to buying proper Parrot food. After a few morsels, Bert became disgusted and then smelled strawberries hidden in a bowl, under a plate, on the counter. Bert knocked off the plate with his bill, which crashed on the floor, making quite a racket. This awakened Stinky, Alan's cat, who was sleeping on the back porch...
﻿

Stinky
While Bert happily chewed on strawberries, Stinky popped in through the cat door, saw Bert, and immediately jumped onto the counter at him. Bert shrieked, and, as birds often do when they take off in a hurry, pooped! On Stinky's head! Stinky was horrified at this insult, and jumped down to clean himself off. To a cat, being pooped on by a bird is probably the worst humiliation. Bert was back on top of the cupboard, giving Stinky the Eye...﻿
Posted by Unknown at 9:03 AM No comments:

Around 9 am at the gallery and Land Office.
Lee's is driving his 1959 VW van to the gallery, Alan's bicycle is in front.
The scooter must belong to someone hiking the path to the nearby ruins...
Just down the road, in Hazel, Alan works at the New Island Land Office, which he rents from the Commonwealth. Alan has a license to sell New Island land directly from the Commonwealth.

"I'm a one-stop shop," says Alan. "I help people buy land and then I'll help them design their dream house if they'd like - that's the fun part. I also sketch events, phenomena, and quick renderings like the one above of my office and Lee's Gallery..."

Alan Faramond has actually had some training in architecture, and vigorously supports sustainable building practices, both of which helped him get hired by the Commonwealth.

Next door is Lee's art gallery. Lee has been here for some time. He's usually off wandering the beaches and back country to make sketches for new paintings. He then does most of his paintings here, and shows them off  in his gallery. Lee and Alan trade time at each others shop when one of them is on the road. Lee creates the paintings of everyone's land and whatever they build on it.

Alan and Lee get along pretty well. When business is slow they hang out and talk about art, architecture, philosophy and the meaning of friendships. Lee lives upstairs over the gallery. Alan commutes on his Malvern Star bicycle from his house near Hazelhurst.﻿
Posted by Unknown at 11:19 AM No comments: