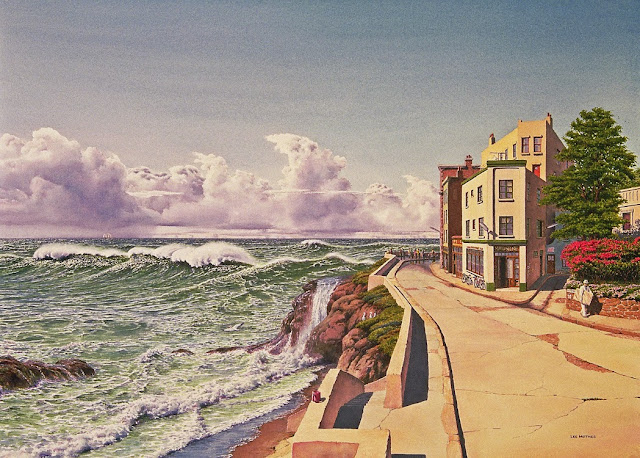 While Trish and Emil were enjoying their new place on East Sumbitch Island, up north, a series of winter storms began generating rough surf off New Island's Putney suburbs. Everyone in the neighborhood turned out to watch huge swells roar past Putney Head, as the weather offshore began to change. The Maidstone Café, Putney's oldest coffee house, is usually busy this time of day, but is nearly cleared out. A local art collector, Oscar Rivvitz, seems unaware of the action.

During New Island's winter months, which are June, July, August (we're in the southern hemisphere, remember...) severe gales lash the South Indian Ocean at the higher latitudes known as the "Roaring 40s" and the "Screaming 50s". Most of this weather-energy reaches New Island in the form of impressive surf, especially along the Southwest Coast. When it's this big at Putney Head, it's really crazy at Brandonhead or Roaring Cape.
Posted by Unknown at 10:19 PM No comments:

Trish de Beaupre Gets her Deed and House! 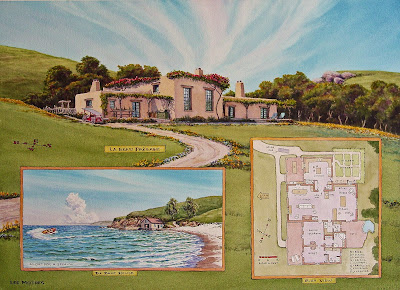 Once on her land, Trish decided she wanted a spacious house with a big kitchen and a large studio. With Alan's help, she found that the clay on East Sumbitch was suitable for adobe-making, and plenty of pencil-pine and oak trees grew nearby for roof beams and patio framework. The doors and windows came from the Sapphire Tribe, the best window-makers on New Island.

With the help of a carpenter and an adobeman, Trish and Emil built their house and repaired the old boathouse, a relic from the days of the Russians.

Alan and Trish worked out the house design and floor plan, then Lee did the painting of her house, its floor plan, the boathouse. That's Emil having fun in his vintage mahogany Chris-Craft. Below is Trish's Grant Deed, issued by the Land Office. 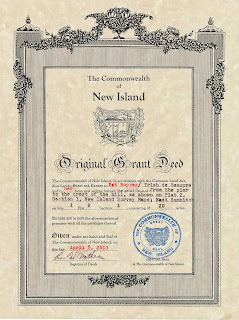 Trish and Emil moved in just this June!
Posted by Unknown at 11:21 AM 2 comments:

Meanwhile, Back at the Land Office

Trish and Emil were looking for land and Trish spotted the Sumbitch Islands on the New Island map, and was amused by the unusual name. To see the islands up close, they took the Mail Schooner up from Putney on its weeky run. As the schooner threaded the narrow Fool's Passage, Trish spotted an old stone boathouse and pier, and she quickly asked if they could be put ashore for one hour. For a "docking fee" the skipper agreed.  While Emil poked around the crumbling boathouse, Trish hiked up the hill and found an ideal site for their new house! 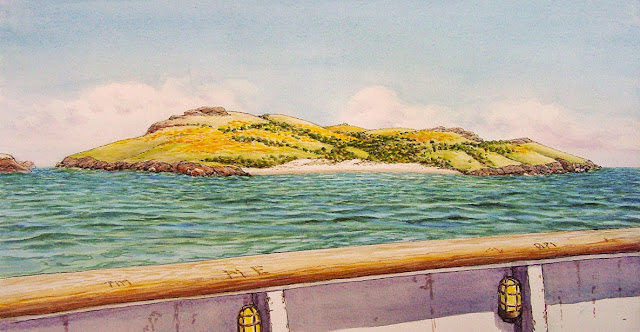 East Sumbitch Island viewed from the mail schooner, which passes through the area once a week.﻿

Trish then went to the Land Office back on the Main Island and met Alan, the clerk, mapper and sometime architect, who works there. Trish told him about her desire to claim land up on the Sumbitch Islands.
"Ah, that's an interesting place up there", Alan told her as he reached for the New Island Survey Book.  Alan then looked at the 34-Section Map, and found the Sumbitch Islands, up at the top, in Section 1: 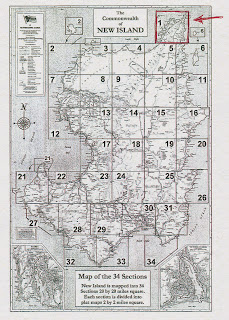 He then went to Plat 2, up near the top of Section 1, which includes the Sumbitch Islands and North Cape: 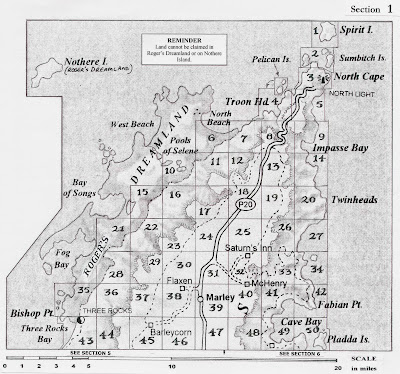 Like all the 34 Sections, Section 1 is divided up into Plats which are about two miles by two miles wide. Each plat is drawn up whenever someone claims property on that plat. Since Trish is the first to claim land on Plat 2, Alan had to draw up the 2-mile-wide plat, in detail, below. Alan then marked the map to show the exact size and location (within a few feet) of Trish's land on East Sumbitch Island. Click on the map to see Alan's work in detail!
﻿ 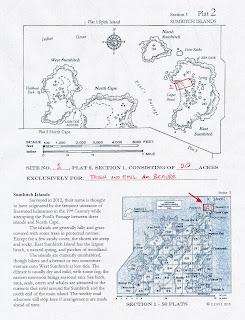 By the way, anyone who claims land on New island gets this same personal treatment!
Posted by Unknown at 10:10 AM No comments: