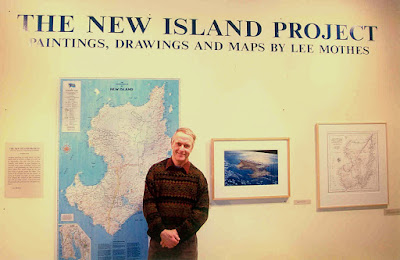 Since 2003, New Island has been seen in museum, libraries and galleries in Wisconsin, USA, as well as in exhibitions in New York, Paris and Switzerland. New Island is available to select venues in the US and abroad, depending on shipping and customs requirements.

New Island has been to:

2005 –"We Could Have Invited Everyone"
Andrew Kreps Gallery, New York, Curated by Peter Coffin and Robert Blackson.

“Organized by artist Peter Coffin, States (do it yourself) is an exhibition that brings together a wide range of micronations, sovereign and independent states, nation-concepts, secession movements and others. All are as a creative response to global political climate.” (quoted from ParisArt, Feb. 2007)


The show consists of many of the original paintings, drawings, maps, the flag and other artifacts that are shown on the New Island website, www.newisland.net, in the New Island Guidebook and on the road map.

Size of show: up to 200 feet of wall space, or as little as 40 feet; plus one or two covered vitrines or glass cases.

Building sites on the island which can include a deed, plat map and a painting of the owners' dream home: $200 to $1600 depending on the artwork required.
The New Island Guidebook, $27.50 retail
The New Island road map, $10 retail.


Please contact Lee Mothes for more information. He would be happy to work with you on your specific needs.