﻿
As Alan was staring out the train car window, his thoughts wandered to the question, Where is Home? You know, that place where you sleep, where you hang your hat every evening, where the supper dish is...  Alan dwells on this all the time, maybe because he constantly feels restless and wants to be somewhere else, even though he has already come a long long way.

Just then a woman with a parrot on her shoulder walks into the car, orders an iced lemon-tea and then sits down across from Alan. The parrot rocks on its feet while swaying its head sideways (the way parrots do) and casts it's unblinking eye at Alan. "I'm Samantha...", the woman said, "...and your name is...?"  "Oh, it's Alan," said Alan , a bit distracted by that eye of the parrot.

"And this is Bert," Samantha added.

They talked for a while, mostly polite chitchat, and then the parrot SHRIEKED, making everyone jump. "Bad bird!" scolded Samantha, and abruptly got up as the parrot, being a parrot, repeated "Badbird badbird badbird..." as Samantha walked out of the car, waving a hand sort of dismissively at Alan.

Eventually he got over all that enough to enjoy the gorgeous sunset (below) from the train window. He thought they were passing File Heads. He'll be home in a little over an hour, and it will be almost dark... 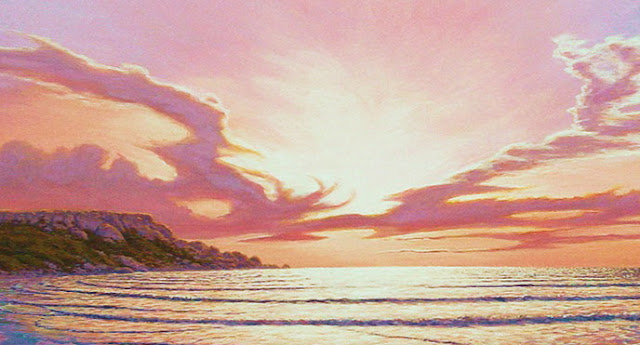 File Heads is a bluff just south of Laverne on Putney Bay.

After the Tsunami, Alan Goes Home

After all the excitement over the sort-of tsunami in Putney Harbor, Alan Faramond (who made the sketch of the bridges) relaxes at the Rainbow Cafe over a cup of dark sumatra and a chocolate gelato. Martha, the Wheatland girl on the bike, had come up to dry her feet and settle her nerves. Still a bit out of breath, she sat down at the counter next to Alan, and announced, "Well, I've never been so accosted by Nature in all my life..." Alan recognized her as she was ordering the minty-green tea, a house specialty. He pulled out his book and showed her the sketch he made of the wave, the bridges, the merganser, and her..."it doesn't really look like you, but it was of you." "Wow, cool...are you one of those depictors?" "Yes, fully licensed by the Commonwealth to record whatever I see around me. I also design houses for people who want something different." "Um", she said, and sipped her mug of tea. She's not that impressed, Alan thought, but he left her one of his calling cards anyway. "I need to get back home, he told her, and if you're ever down near Hazel, stop by - I work at the Land Office there."
"Where's Hazel?"
"South of Rosslea."
"Oh..."
He then walked to the Downtown Station and took the Putney-Victoria train back home. 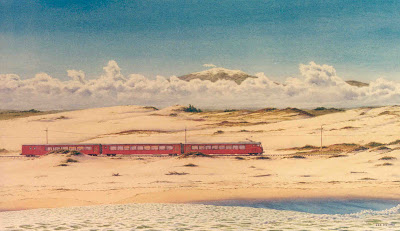 Here the train passes close to the waves,
as Mt. Hayes is revealed above the clouds.
Alan always enjoys the ride. The route follows the coast through not-so scenic Portmore, but more scenic Abbotsford, Skegness and then Rosslea. Passengers can watch the rolling hills and views of lofty Mt. Hayes from one side of the train, or the surf and beaches from the other. Alan almost always sits on the seaward side so he can watch the waves.

He likes to sit in the last car, close to the coffee bar. As people come in to get a mocha, they are likely to stop and chat; Alan has met more than one house-designing client here. He always keeps a stack of his calling cards handy...
Here is the route of Alan's train: 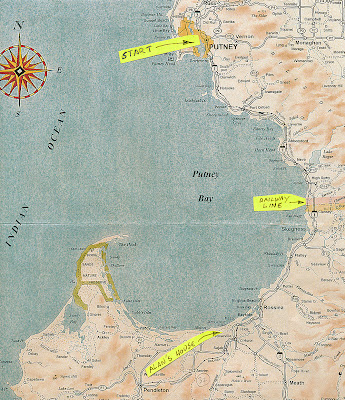