This is New Island's Community, that began in 2003.

Here are some examples of peoples' creativity...

In the 1840s, an American ship's carpenter, Gil Rolling, was stranded here after an unfortunate incident with a Russian whaling ship. He was released, managed to find carpentry work in the Putney area, and eventually met Jane Fremont, a local Irish woman with two kids. They settled here, and had two more children of their own. Somewhere around 1860, Gil and Jane built this Nantucket-inspired shingle house on the dunes just above the beach. Their childrens' children still live here. 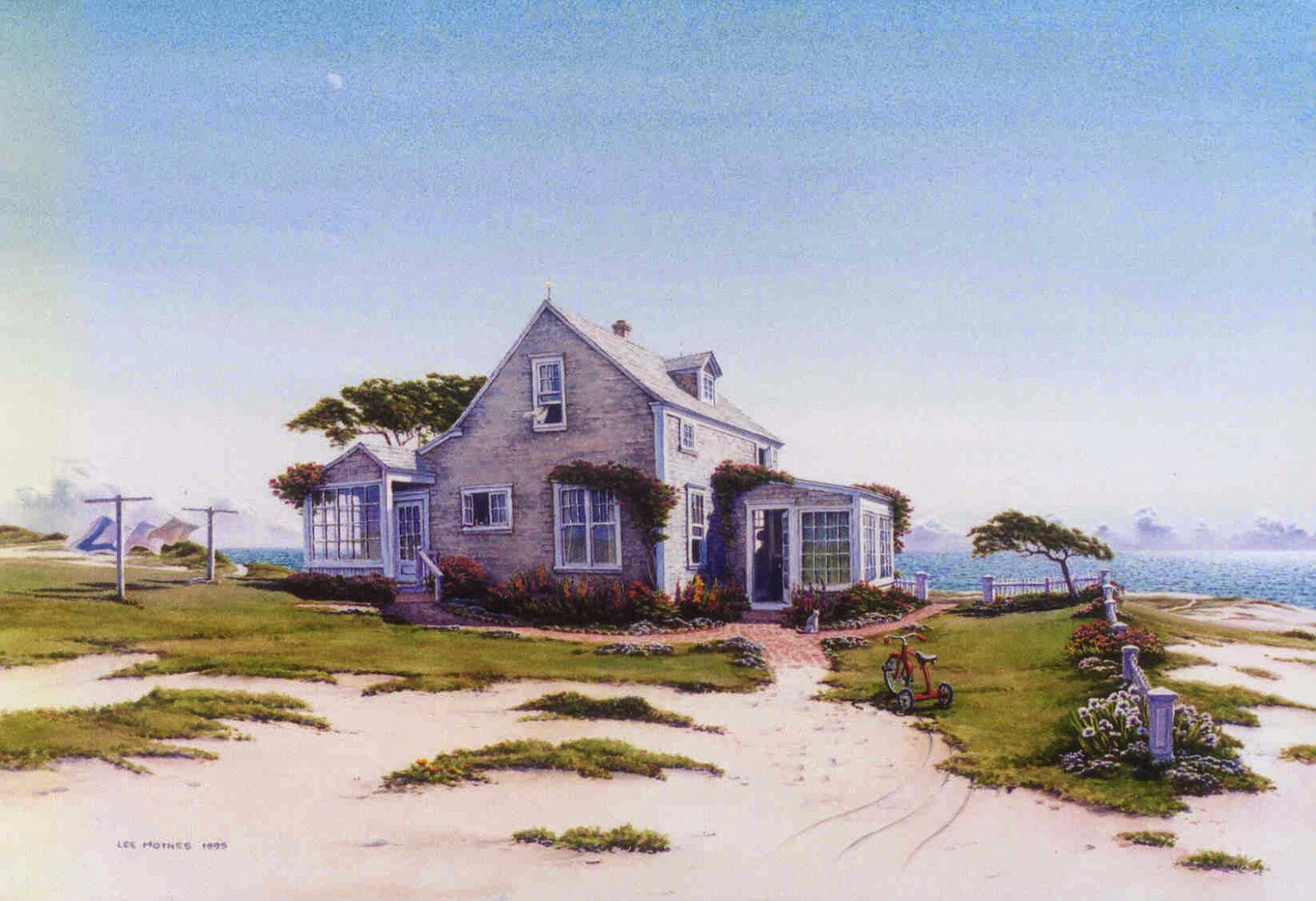 2. The Poloustrov Museum on Putney Bay.

Sophia St. Andrew runs the Poloustrov Museum, once the summer home of Sergei Poloustrov, the Russian Governor-General of the island in the early 1900s. Sophia is a descendant of the Poloustrov family and lives in her own private rooms in the back. Skegness is quite close to snow-capped Mt. Hayes, New Island's active (though sleeping) volcano...

Location: At the mouth of the Barysh River, near Skegness, Section 17. 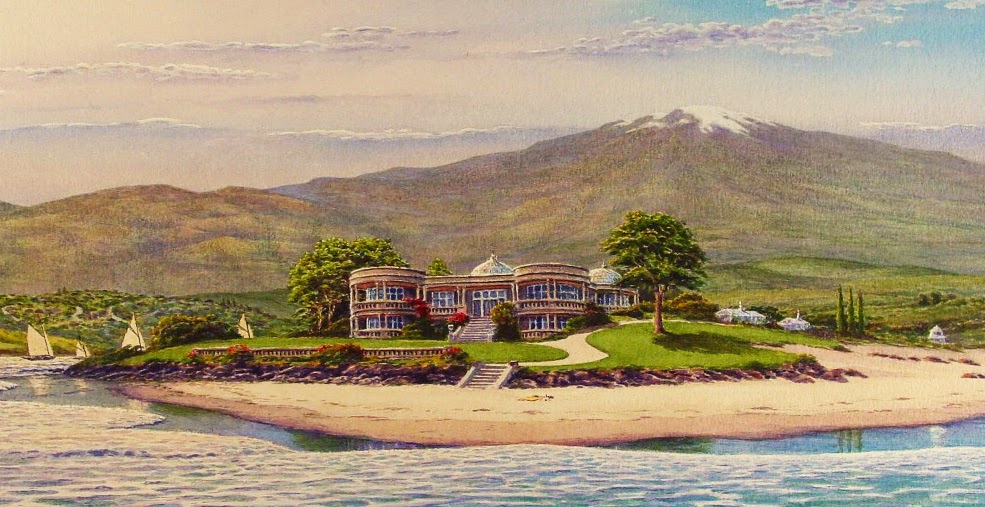 In the far western shore of the island, the landscape is low, sandy, and boasts miles of empty beaches. A few small settlements are nearby. Sheila wanted her own beach-house retreat, and comes out here on foot with a grocery/supply cart to stay a week or two at a time. There is no road access to this stretch of coast. 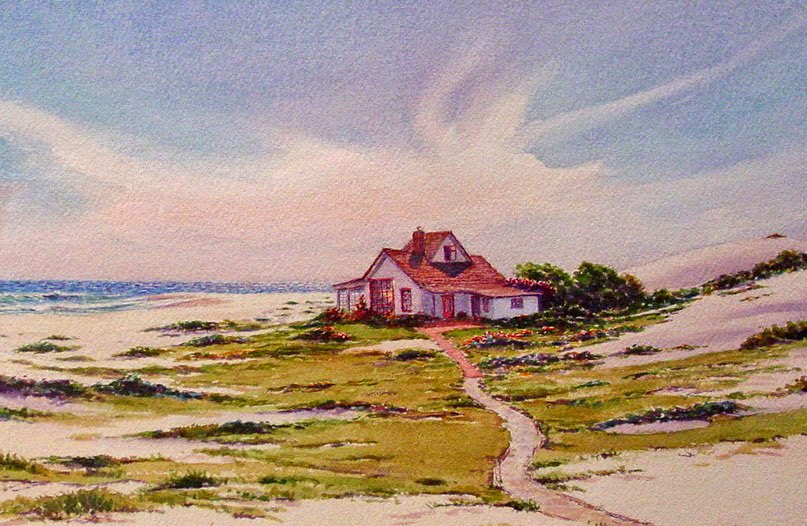 4.  Pinoak Vinyard,  in the Pinoak Hills

A retiring financial wizard settled here some years ago, and is happily growing Riesling and Pinot Noir grapes. His Pinoak label has recently become popular all over New Island. He even imported his favorite old red pickup truck from the USA (at great expense) and doesn't mind the high taxes and gas prices to maintain such a vehicle here. 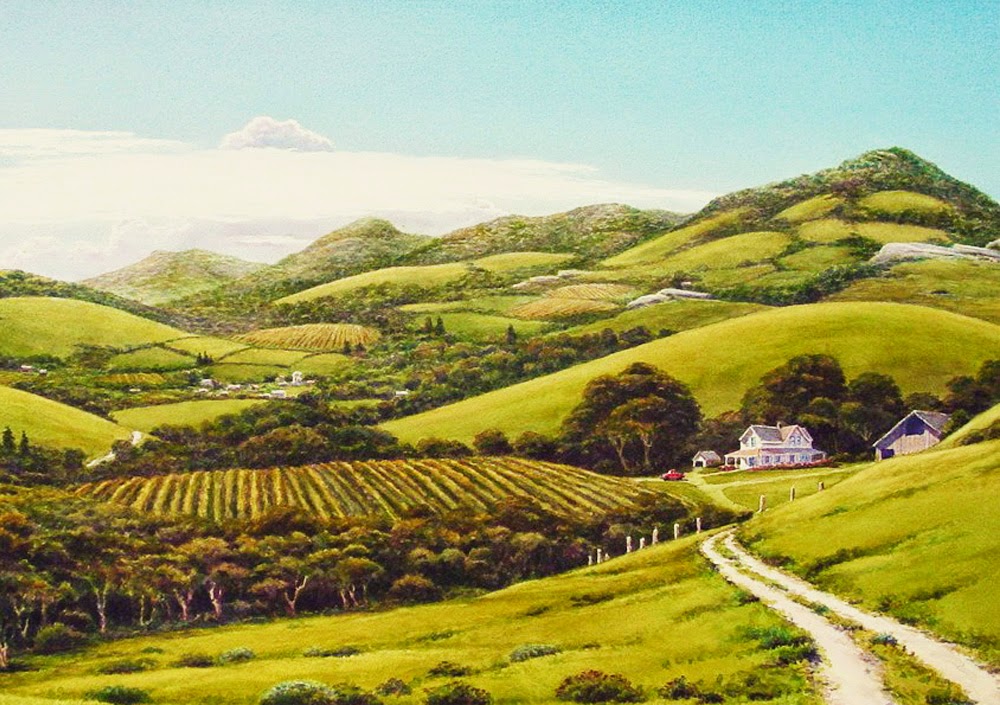 Travelin' Gal (who actually lives in California) likes the coffee shops and cinemas in Putney, as well as the nearby beaches. She chose this lot (below) so she can take the streetcar into town or out to the beaches west of Putney. She wanted a contemporary house with lots of big windows and cheerful colors. The hired an architect (Lee) who came up with the design below.

Soltaire the Assembler  built this earth home in the Wicklow Mountain foothills overlooking Otter Bay. He wanted his studio, sales gallery and home for him and his goats to be all in the same structure. He enjoys the expansive view of Otter Bay, New Island's eastern coast, and the Indian Ocean from his patio.


7. A round stoner tower-house on Petrel Bay, northwest coast

Adjacent to the humble but all-year-flowing Wonder River, Judy and Lyle's house-and-inn has been completed. It is situated along the North Bight Path, so it is easily accessed by hikers and wanderers passing through. Judy and Lyle's site is guaranteed by the deed below issued by the Commonwealth (me!). 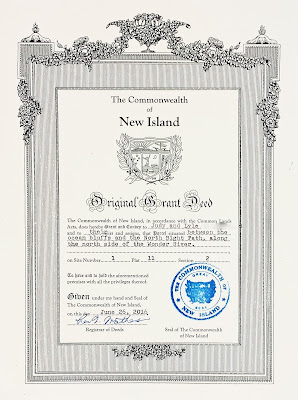 Judy and Lyle's site on New Island include the painting, the pencil sketch,
the deed and the plat maps, all shown here. They chose this site from the New Island Guidebook and the road map.


Sections and Plats: To accurately describe a claim, each unique site is drawn on a plat map, similar to Plat 11, which is in Section 2. (see above). All the Section maps are included in the Guidebook to help one locate a building site.


More on the way!