It's wildflower season on New Island! 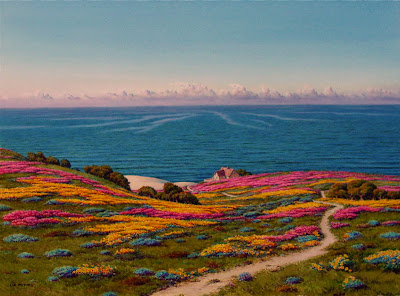 Red miandra, yellow poppies and serge cover this hillside near Brandonhead,
on New Island's southwestern coast
The wildflowers are blooming on New Island! This natural event is celebrated as the annual Wildflower Holidays, when people take time off just to hike in the hills and enjoy the colors for a day or two! The official dates this year are from October 6-20, so tell your boss you want some time off!
New Island's mild Mediterranean climate and isolation from the rest of the world's life-forms has allowed the evolution of many unique species of plants and wildlife. Red miandra grows in thick clumps on New Island's coastal and lowland hills, usually mixed with patches of yellow poppies and turquoise serge. A close cousin, night-blooming miandra, thrives in the cooler, drier highlands. The poppy is a ground-hugging drought-resistant variety similar to its California cousins. Blue or turquoise serge is also ground-hugging with tiny blue-green "buds" that cover the plant in spring.
The first New Island springtime must have been quite a spectacle for the early shipwrecked settlers.  While struggling to grow edible crops on this new place, the settlers foraged these and other indigenous plants for food, and learned early on the psychedelic powers of the little berries of the red- and night-blooming miandra. When red miandra berries (which are actually purple - the flower is a magenta-red) are brewed as tea or chewed, they can produce a near-delirious calm, but with an endorphin high. This lasts for about an hour before tapering off with no side affects afterward. No one thinks much about it, it's just a local custom.
﻿
Posted by Unknown at 8:51 AM