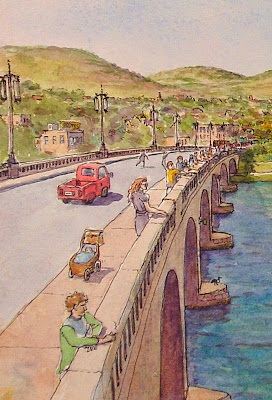 ... was the pride and joy of Alexander Poloustrov's modernization efforts in the early 1900s.  As the railway bridge was nearing completion, he moved his labor force 200 yards up the bay to begin construction on a similar concrete arch span, which was completed in 1914. The elegant street lighting was special-ordered from St. Petersburg and shipped around South Africa.
It's wide sidewalks and little traffic make it a favorite walking route back and forth from downtown Putney to the west/northwest neighborhoods. Jumping off or diving from the bridge is not allowed, though young daredevils try it quite often. Some have met a grisly end by hitting a stone abutment (such as where the Chinese merganser is standing) instead of the water. There have been eighteen known suicide attempts from the bridge, but probably more since records have been spotty. Only two of these were known to be successful, since it's not that high off the water.
Except for frightening off the merganser, the tsunami had no affect on the bridge.
*****************************
A brief review: 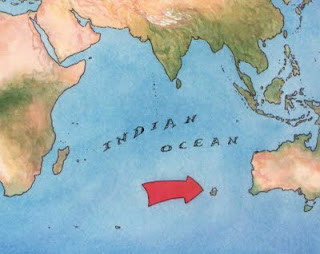 This all happened in the City of Putney, on
The Commonwealth of New Island, in the Indian Ocean.