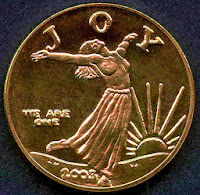 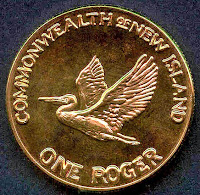 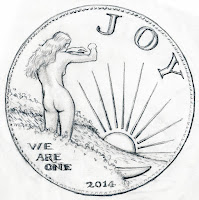 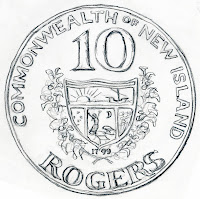 The Original one-roger, in brass, has been in circulation since 2003.
Designs for future roger coins, such as the 10-roger with surfer,
are being considered.

New Island continued to use Russian currency for several years after independence in 1992. Finally, the new government enlisted the skills of medalist Virginia Jansen to create the nation's first issue, the one-roger. The "roger" denomination originates from Roger Putney, our charismatic spiritual leader during the first years of islander settlement. "We are One" and "Joy" are New Island mottoes.

Until other denominations of ten-pence,100 pence, half-roger, ten-, fifty- and 100-roger coins are introduced, Russian (mostly Soviet) rubles will still be used to make change.