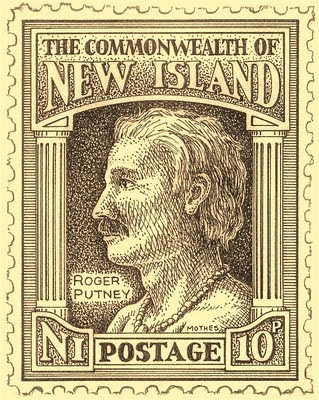 Roger Putney was the first European born on New Island. He arrived on Nov. 6, 1799, only one month after the wreck of the Lady Marie. Roger never knew his father but was close to his mother, Tabathea, who taught him to read by age six. Before long, Roger was allowed to visit Capt. Hayes' private library, which much later became the island's first lending library. With a book or two and lunch in a sack, young Roger was often seen wandering off in the early morning toward the beaches and hills, and not returning until dusk.

Cecelia O'Hassett, a friend of Tabathea's, was very impressed by this boy who seemed very insightful for his age. Roger in turn was awed by Cecelia's charisma, and loved to sit with her and listen to her naked-protest stories! From Cecelia, Roger learned not only diplomacy, but that rare skill of really hearing both sides' arguments and then finding the elegant solution.

When Roger was about 15, people began to notice his intense gaze, soothing touch and an aura about him that could put you to sleep. They felt they could trust him completely. His reputation as a shaman or guide spread among the newly settled communities along the Beastey Bay shore; if you had a problem, Roger could probably help.

Scouting and survey parties had been exploring the island almost from the first day they arrived. A valley that had been described as "lush, green, storm-protected" had been located to the north, so in 1813 Roger and Tabathea joined a small settler group who trekked there and founded the town of Monaghan. During a wedding celebration the next year the mysterious otter appeared, again in a eucalyptus grove, and spoke to several of the participants who were taking the short walk from the wedding ceremony to the feast site. Like the first appearance in Womby, no one said anything in return, for fear they were hallucinating!

This time Roger was there. He walked up to the otter and they immediately began talking like this was old times! The stunned bride, groom and about 20 friends stood by thinking maybe this was all a dream! This turned out to be the otter's last appearance and Roger came away from the encounter looking like he'd seen God...
Posted by Unknown at 9:32 PM