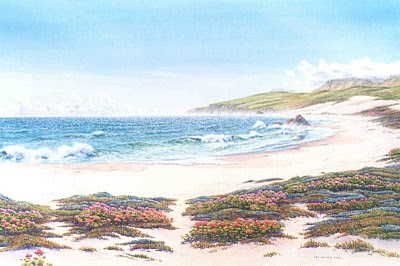 This view of Twentymile Beach shows Three Rocks, the place where one
'enters' Roger's Dreamland. (See map below)
No one has yet captured an image of The Dreamland itself! 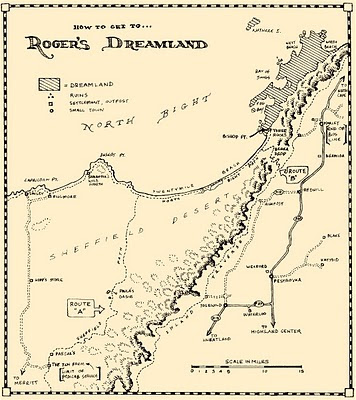 Some can find the Dreamland, some cannot.
The point of entry is at the north end of Twentymile Beach, a place called Three Rocks.
To get in you climb onto the lowest rock, close your eyes and imagine there are sand dunes
and warm spring-fed lagoons backed by grassy meadows and lush forests;
in other words a kind of Eden instead of the crashing surf you hear below.
Step between the two larger tower-rocks with this
image in your mind, and there you are.
It usually works.
When he could be located, Roger Putney became the island's spirtual leader. During those first years when everyone feared a takeover by the British navy or other major power, Roger spoke of sharing, forgiveness, working together and being extremely creative about living together, given the high offset of women to men. The terms Family, Village, Town and Settlement took an new meanings, mostly through Roger's teachings.

When Roger wasn't wandering the island and talking to people, he found time to marry Louise Atherton, a long-time friend. They built a stone house in Monaghan, and as their three children grew older, he once again set off walking the hinterlands of the island, often taking a kid or two along. They stopped along the way to build tiny hermitages or single-room huts, usually of stone, in isolated places, as retreats for other wanderers.

His oddest contribution came late in life, and many people wonder why it exists at all.

When Roger was about 70, he wandered off alone for over two years having left no word except secretly to Louise. People began to worry and many searched for him but found no trace. Then, on a bright chilly June morning in 1872, he walked into the Monaghan Commons appearing "healthy, rested and not a day over 60!", according to the Monaghan Bugle-Tattler.

The Tattler then went on to say, "Mr. Putney claims to have found what he calls a Dream-land, situated at the northern end of Twenty-mile Beach. He says it was pointed out to him by an otter in a dream while he was 'deep in being', as he calls it. To quote Mr. Putney,
Ya look for the three rocks at th' end o' that long beach up north, then ya stand on th' middle-one of them an, look out ta sea fer a while an' let yer mind rest. Be with what yer see there and think what ya'd like to see. If ya believes as if ya know it's there, it'll be there. Yaa-hh, that Otter told me....Ha! "

Roger stayed near home after his long absence, sitting in on local council meetings as 'spiritual advisor'. He also ran a kind of personal counseling service to help pay the bills. He was sorely missed when he died in 1891, at age 92.

Ever since then, people have trekked to the place known as Three Rocks, and untold numbers have "gone in" to the Dreamland. A few hours or sometimes many days later these 'dreamers' return by way of the same rock. They usually describe a sandy, desert-like landscape with beautiful freshwater pools and streams, lovely coves and beaches and a pervasive, eerie charge of energy in the air. Some have come back with stories and descriptions of a far different nature. The sign-in register at Three Rocks contains the names of many who haven't come back yet...
Posted by Unknown at 10:39 AM