32. Portals, Possibilities and Planes of Exisence

New Island is likely on a plane of existence observed by some but not by all, as explained in the world of quantum physics...

According to Heisenburg, when a quantum particle is not observed it exists as an ensemble of ''possibilities'' (in physics called a virtual state) in which it has a likelihood of existing simultaneously at all points of space; however, when an observation is performed the quantum particle makes a discontinuous jump (called a quantum transition) to a state with some definite position and is said to be in a condition of ''actuality'' (in physics called a physical state).
--Wikipedia

As the evening progressed, Adrian noticed that Alan seemed more relaxed. "And by the way, how are you feeling? You look a little better than you did the other night."

"You know, Alan, I've never been out of this country, so I've never gone through that experience you went through."

"Oh, you mean that doorway in Fremantle?"

"Yes, I'm curious about that. Is it still on your mind?"

Alan sat back and pondered this whole new subject. "Well, it has been on my mind a little. I didn't think there was anything unusual about finding the Rudyard Lines office, but now I remember the blank looks I got from the hotel people and the cabbie when I asked about it. The cab driver never acknowledged the place even after I saw the sign and told him to stop. After I paid for the cab, I just walked up to the door, pulled the handle, and it opened. After all, I had my ticket!

"So you assumed the door would open, and it did, and you just went in..."

"Yes! And then I was hit with this amazing buzzing sensation once I was inside - and it felt so refreshing, like I was being released from something. It's hard to describe it. Anyway, I felt lighter once I walked inside that building. The ticket lady gave me a long look at one point just before taking me to the boat. But then at the dock, she gave me the best hug I'd had in a long time, and said something like she was glad I made it this far."

"Wow," Adrian replied. "Even before you arrived, this 'getting in' thing has been on my mind, and I've done a little reading. It seems that in quantum physics (bear with me now) there is a possibility that some things are uncertain or unknown until they are experienced by an observer. There has been much to-do about Schrodinger's cat*, and this seems similar, no?  Until one pulls on the door of that Rudyard Lines office in Fremantle, one does not know whether the Rudyard Shipping Line, or that ticket lady you mentioned, will actually be in there or not. And that one doorway, as far as I know, is the only way to get to our island-nation!

"And that," Adrian added, "brings up why many New Islanders are reluctant to travel abroad. There are rumors that some have left, intending to return, and have never been heard from again. We are well aware of that doorway, or portal, if you will, and that it might not be there for everyone."

"And I see that Roger's Dreamland is on your list. That, too is a fascinating subject here. To get into the Dreamland, one must enter another 'portal' at a place called Three Rocks, which is on Twentymile Beach, far to the north, across the Sheffield Desert. A stone shelter containing a visitors' register and a doorway overlooking the surf has been built amid the three rocks.  Some of those who walk up to the doorway 'see' the Dreamland unfold before them, and then they simply sign the book and walk in. For others, nothing changes - the beach remains the same."

Adrian continued, "And that registry book at Three Rocks has many names of  'dreamers' who went in and never returned. Some have been gone for years.

"Then my question, Alan, is this: Is Roger's Dreamland, or this whole island for that matter, like Schrodinger's cat -  both there and not there until observed?"

Alan took another sip of wine, stared out at what seemed like a very real moonlit shoreline, and finally said, "I have no idea what to tell you, Roger, er, I mean Adrian..."

It was getting late. 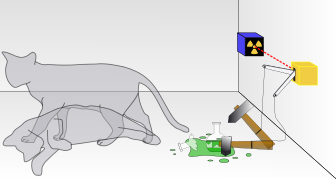 Schrödinger's cat: a cat, a flask of poison, and a radioactive source are placed in a sealed box. If an internal monitor detects radioactivity (i.e. a single atom decaying), the flask is shattered, releasing the poison that kills the cat. The Copenhagen interpretation of quantum mechanics implies that after a while, the cat is simultaneously alive and dead. Yet, when one looks in the box, one sees the cat either alive or dead, not both alive and dead. This poses the question of when exactly quantum superposition ends and reality collapses into one possibility or the other.