How to Get There 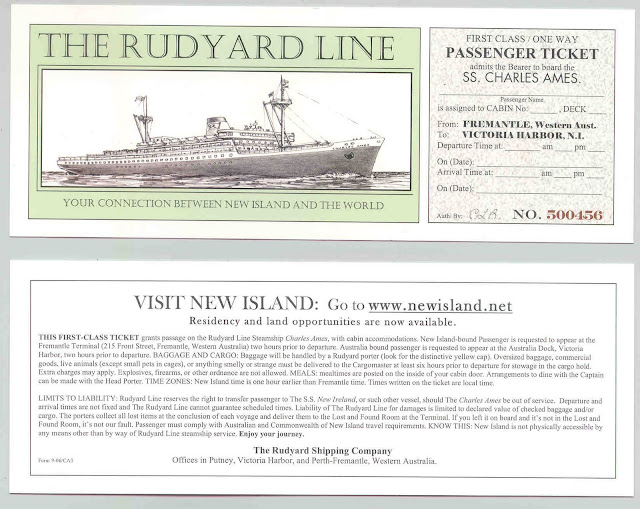 Your ticket to New Island.

New Island can be reached by taking passage aboard a Rudyard Line steamer.


The SS Charles Ames and the SS New Ireland each leave once a week from the Port of Fremantle, Western Australia. The Ames leaves every Sunday noon from Fremantle and docks at Victoria Harbor the following Tuesday at about 3 pm. The Ireland leaves every Thursday at noon, and arrives at the Putney Main Dock the following Saturday evening. Fremantle (next-door to Perth) can be easily reached by air from all points worldwide. You may call the Rudyard shipping Line Office in Fremantle for reservations...some day you'll get through; or you can contact me.


Scheduled airline service via Aeroflot from Moscow and Kiev was available until 1992 when the Soviets pulled out of New Island, taking the airport facilities with them. The runways at the old airport at Vernon (outside Putney) are now maintained for emergency landings only. New Island's Ministry of Trade is willing to hear proposals to start up scheduled passenger air service to and from Australia, Asia, Africa or beyond.
And, in case anyone tries to navigate to New Island on their own, beware: the geography of the region will absolutely upset your plans.
By the way, cruise ships have been warned away from New Island ports unless there is an emergency. This is a long story, but has mostly to do with a reluctance of New Islanders to allow the island to become one large resort.
Contact me if you need a ticket!

Email ThisBlogThis!Share to TwitterShare to FacebookShare to Pinterest
Labels: Travel