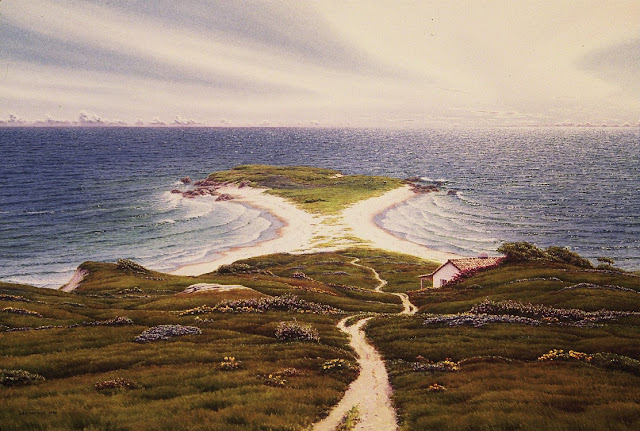 This is rumored to be Bird Point, but the locals won't say for sure...
Much of New Island's eastern coast is uninhabited or very sparsely so. The entire coast is accessed by only two roads, the P17 and the M25. The rest of this 200-mile-long coast is accessible only by walking the Great East Coast Path.

Several Japanese fishing families settled the rocky northern coast in the early 1800s, and they continue their traditional way of life. Walkers are invited to stay at several inns and spas in the old villages. Further south, a few towns have grown to supply the smaller tribes and settlements. Subsistance-farming and resort tribes are the rule on the southern coast. Many New Islanders trek along this coast to vacation at these tribal spas for weeks at a time.  Further south are a few secretive settlements, such as Covenmoor, which welcome visitors only during special annual festvals. Inquire locally if you're uncertain!

Ahhh, the beaches cannot be surpassed! The Path keeps to the firm ground just above the most beautiful, swimmable, sunnable sand spits you can imagine, so walking and light haulage is comfortable. The surf is gentler than on the blustery South-West coasts and is ideal fro body surfing. Camping is allowed on the beaches and headlands, and swimsuits are optional nearly everywhere except the Ignatz Municipal Beach and Plunge.

A few people are building homes on the claimable common lands along this coast, but the beaches will always remain accessible.
Posted by Unknown at 10:49 AM