An adventurous soul know as Travelin' Gal has decided she just loves the old Peagarden Park neighborhood in Putney. She found a vacant lot there a few months ago and has recently appointed the mysterious New Island architect Alan Faramond to design her house. The lot, it turns out, is the very one with the story posted in April of this year. Faramond is hard to find, but New Islanders who know where to look hire him for his "build with nature" skills.

Faramond complied with these sketches.  Travelin' Gal is pleased and construction will start in a couple of weeks. 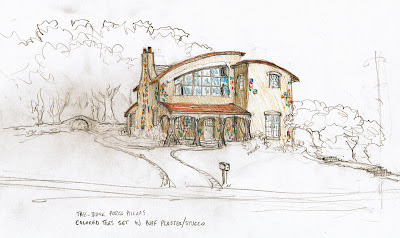 The house will be built of  hewn Wicklow limestone, that is brought in by barge from quarries near Silent Bay. The porch pillars will be branches and the base from a deceased fig tree that once grew in the rear of the lot. The carvings in the tree's trunk tell their own story! 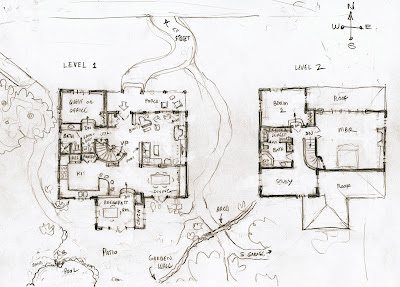 Though the house faces Rigby Street on these plans, it will be tuned to face more westerly toward Joplin Street and the view of Aussie Slough and the harbor. 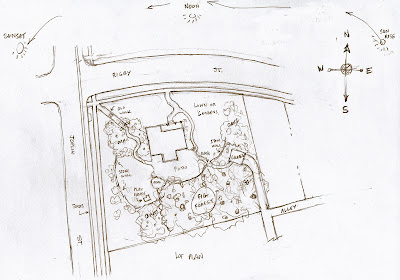 Travelin' Gal, originally from California, arrived on New Island in 2011.