A new resident of New Island tells his story...

The Story of My Arrival on New Island

by Soltaire the Assembler
"While it is highly unlikely that any citizen of New Island, let along passers-thru, would have any interest in knowing the facts surrounding my introduction and romance with New Island, perhaps my offspring would like to know how it is that they have inherited my five acres on Gresl Ridge in Mulhenry County, above the Sacred Otter Wandering Preserve.
"Before the year 2000 I had no knowledge of , none in the slightest. I was not much of a wanderer, nor did I have any desire to remove myself from my comfortable small home in . It was an odd quirk of fate that brought to my attention...and it was due to my particular form of art-making...and some considerable improbable good luck.
"I had taken on the appellation of 'Soltaire, the Assembler' as a result of my fascination...perhaps fixation, compulsion, and/or passion with all manner of artifact...natural, ancient, popular, recent, valuable or valueless, depending on who was the viewer. I found a need to gather together these many elements from many milieus, and join them in assemblage sculptures. Some of these sculptures were small, perhaps two feet or smaller, but most were large, reaching to twelve feet in one or more directions.
"In one of these assemblages I incorporated the bill of a sawfish which I found in some forgotten curiosity shop. This particular sculpture was a tribute to one of my grandfathers who passed well before I was born, but who was held in high esteem by my entire family...who was spoken of as a bit of a mystery man and an adventurer. In fact I titled it 'Grandfather's Souvenirs', and created it to appear as an old cabinet of curiosities, ostensibly consisting of objects he might have acquired on his travels around the world. (For anyone who wishes to see this finished sculpture, go to Gresl.com and search the site.)
"It was only in casually studying this sawfish bill, with the toothy and sharp protuberances along its sides, that I noticed some printing in faded ink. Someone had written this phrase: 'Bill from a Saw Tooth Shark, taken off the southeast coast of New '. And, more surprisingly...unbelievably in fact...I found the faded and bleached name...of my grandfather. Yes! On this oddity, this remnant of a beast from the other side of the world which I had found in a rural shop in , was the name of my fathers' father.
After recovering from the shock, and reading the words many times, I was convinced that this marine artifact had once been owned by my grandfather. This astounding turn of events led me to seek out where this place, , was on the globe. I was further surprised that I had chosen a somewhat difficult chore, to locate this place, as not all maps included it. That alone intrigued me, and with some effort I eventually I learned more about the unique history of the Commonwealth. I was drawn to visit it. After all, my adventuring grandfather had been there, and this island in the was one of the few links I had to him.
"So it is that I was introduced to this remote place of oceans and dreams, this island of things seen out of the corner of one's eye...not all clear and solid. It was a place that reminded me of tales told to young children, drawn out of fairy tales, stories built out of imagination, sunshine and clouds.
"How could I not move here?"
From Soltaire, The Assembler, New Island resident on Gresl Ridge, Thistledown Plot Studio and Gallery. 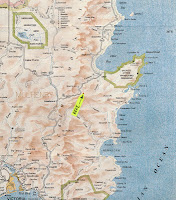 This area is at the lower right on the road map:

Soltair's five-acre building site is about a six hour solar-bike ride (mostly uphill)
or a two-hour bus ride from Victoria harbor.
By bus, take the Ignatz-Hockney Islebus and get off at Gresl Ridge,
just before the Blum's Inn stop.
Then walk the quarter-mile path to Thistledown Plot Atelier.
Soltaire the Assembler will greet you when he completes his studio-gallery.