12: A Look around Victoria Harbor 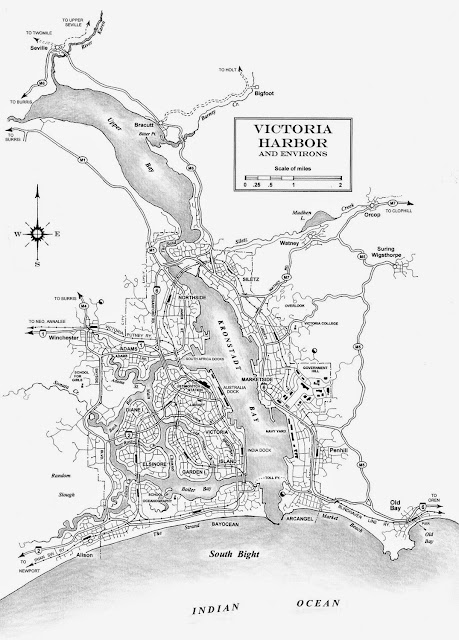 To give Alan a better look at the city, Maggie offered to drive the long way to his lodging. She seemed more relaxed, now that she had delivered Alan to her boss. Alan, also more relaxed, finally noticed the car they were in - a mint-condition VW Kombi!  "This thing must be 50 years old," he said.

Margaret explained that these vans were imported in the late 1960s and are constantly maintained. "Automobiles are very rare here, due to the high tax on them, and because petrol is so expensive. These cars originally belonged to the Russian navy, and were left to us at Independence. They were already 30 years old - too beat-up to take with them. We cleaned them up and still use them!"

Part of the government fleet

Margaret drove down from Government Hill to the ferry at Archangel (bottom of map). Then she took him through the Bayocean neighborhood to Alison Beach, then north on Hwy 2 to Diane Island, then to Victoria Island (center of the map, above). They passed many pedestrians, some pedicabs, a few strange-looking cars with solar-panel roofs, a city bus or two but very few petrol-driven cars or trucks. The city was busy, but seemed eerily quiet. She drove him to Cold Water Lane where a room in an older pensione had been reserved. She pulled up and told Alan to speak to Mrs. Plakaford about his room. Alan took this as a cue to get his bag - Margaret seemed in a hurry to move on.

"Well, good luck Alan Faramond," she said from the driver's seat as Alan got out. "I trust you'll have an interesting journey on our island, and I'll expect you to call in once a week. There is a telephone at your apartment in Hazel. We've also enclosed some travel money with your other things. If you've no more questions, I must be getting on...!"

And she roared off.