8: At Sea that Night 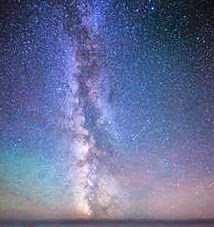 The Milky Way somewhere over the Southern Ocean

Alan wanted to listen to the singer with that wonderful voice. He thought it sounded like that Scottish group Capercaillie. The music stirred up something inside of him, but he didn't know what exactly was going on. It sure felt good, though. While he watched the dancing, he sipped on a Moscow mule at the cantina bar. They also served hamburgers, so while having one of those and a second mule, he began swaying to the music, especially when those drums took over.

Again he turned his attention to the singer, her voice so melodic. Then with a wild look in her eye, she glanced at him, making him look away, and feel all fumbly. She kept it up, so finally he smiled back at her, and she nodded to him, ever so slightly. What is this about? Does she know me? Maybe he was just hyper-aware of anyone's notice because he was so far away from home, or that he had for some time now been so unsociable, so cut-off...?

As the night grew deeper, Alan noticed the Milky Way rising straight up above the ocean, arcing high above the ship and then back to the opposite horizon. Wow...he had ever seen it so vividly before, and it seemed so close, so intense! Again, he felt that something is definitely different here. He loved the thought that he is sailing on the Southern Ocean - how exotic! While staring up at the immense core of the galaxy, Alan had a strong feeling that this trip was already touching something deeper than than anything he has ever known.

A little dazed,  he finally went to bed.
Posted by Unknown at 7:51 AM