A steward with dreadlocks showed Alan to his cabin, a nice one on the main deck with a generous ocean view. Alan was unsure about sea travel, having never done it before, and hoped he wouldn't get seasick. The steward showed Alan all the details of his accommodation, such as how to flush the 'ead. (Oh, the toilet, Alan realized.) "Mealtimes", the steward explained, "are announced by a series of bells: two bells, rung three times, announce breakfast; three bells (rung twice) are the call for lunch, and four bells (rung twice) announce supper. A loud buzzer, by contrast, will announce various emergencies such as a fire, man overboard, or taking on water. Got all that?" Alan nodded as the steward pointed to the chart for all that on the door.

"On a lighter note," he continued, "on almost every trip a few passengers do the drums and play guitars in the evening, out aft of the outdoor cantina....quite spontaneous, and sometimes there's the dancing. It's become a kind of tradition. Yer welcome to join us..."

And then he left.

Alan sat down on his bunk. Now that was nice, he thought, but he wasn't sure he'd venture it...the music that is. He then began to wonder what the ticket-lady meant when she said "Glad you made it." Did she hug everyone coming through there? It left him with a good-feeling, that he was wanted, appreciated, but also mystified.

He looked around and began to notice his cabin. He admired the carved-wood sideboard on his bunk to prevent his rolling off in rough seas, he figured. He continued to sit there, not thinking much about anything, just looked around his little room. He liked the well-worn varnished mahogany, the heavy white paint on the steel walls, the functional brass hardware. It was all of such practical design, he thought, and this felt good, too.

Alan heard a long deep horn blast - and then the shed outside his window slowly began to glide by. Soon after that, four bells sounded and Alan went off to search for the dining room. 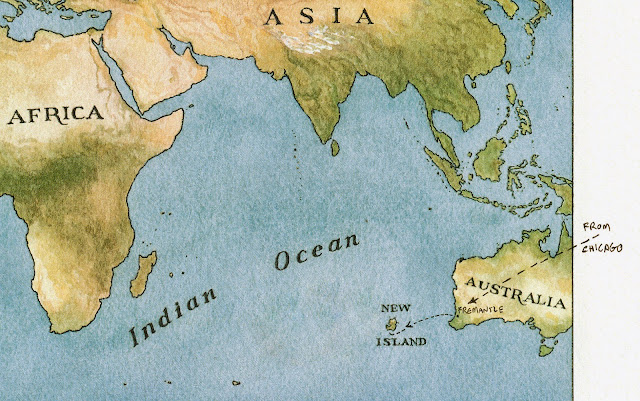 Alan is embarking on a three-day, two-night trip to Victoria Harbor from
Fremantle, Western Australia. He has trouble believing he has come so far!