4: Alan Starts Out from Michigan City... 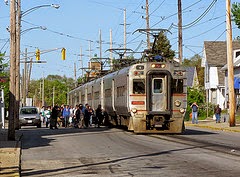 At 8:43 am that morning, Alan boarded the South Shore train at the 11th Street stop in Michigan City. He had to wait on the sidewalk - there wasn't really a station there.  In downtown Chicago, He connected with a Metra train that took him to O'hare International Airport.

He had to use his own money to get to O'hare, but he had his tickets from the New Island Ministry of Trade for the rest of the trip. In Terminal 1 he boarded a Qantas flight at 3:30 pm bound for Perth, Western Australia. Almost 33 hours later, after stops in Los Angeles and Melbourne, he arrived in Perth about 2:10 in the afternoon, and Alan didn't know what day it was.  From the airport in Perth, he took a taxi to Fremantle, where he had a voucher for the Orient Hotel on the corner of Henry and High Streets. 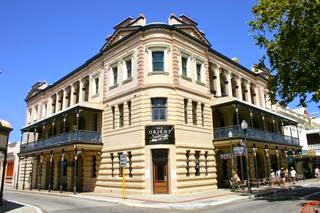 After spending a lovely and very restful night at the Orient (the corner suite, third floor), Alan had a leisurely breakfast, and then inquired about directions to the Rudyard Line office. The concierge smiled, and with a kind of blank look, replied, "The who"?