A Better Picture by NASA

Another view I found of the island is this gorgeous photograph taken by a NASA astronaut/photographer on the June 1985 mission of the shuttle Discovery. Here you get an idea of the island's topography... 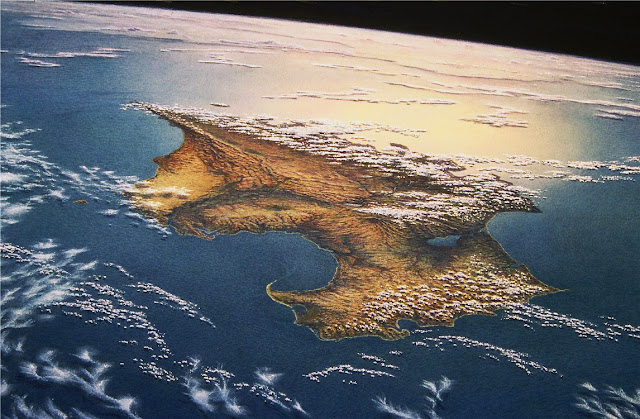 New Island from 450 Miles Up - taken above the southwestern coast looking northeast.
In the photo at left lies the sandy, relatively flat Sheffield Desert. Putney Bay fills the lower center, and Lake Riga is clearly visible to the right. TheWicklow-Blue Highlands, a vast plateau with an average elevation of 3,000 feet, dominates the upper center.

The island is an old piece of an ancient continent that the paleo-geologists call Gondwana. New Island's age explains it's limestone plateau as well as its generous beaches and sand dunes. Where there is a lot of sand, you know the place is old. It's climate is primarily Mediterranean﻿, or similar to that of Southwestern Australia and California. The island's winters are rainy, with some snow above 2,500 feet. Summers are dry and mild, and the hotter areas are to the north. New Island is in the Southern Temperate Zone; indeed, the city of Putney is almost the same latitude south as San Francisco, California is in the north.
Next: How to get here.
Posted by Unknown at 8:47 AM