Why Isn't New Island on My GPS? 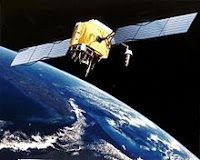 New Islanders claim there are too many nosy satellites!

When you look up the co-ordinates 98 degrees 5 minutes East Longitude by 35 degrees 40 minutes South Latitude, you'll likely find a blank area of the Indian Ocean. However, New Islanders know this to be roughly the location of downtown Putney, New Island's largest city. The rest of the world simply doesn't know...

A recently-retired CIA operative told me that satellite imagery is often edited in some parts of the world. Certain features in Area 51 in Nevada, and similar places in Russia, North Korea, China and Iran, come to mind. The governments there simply don't want us to see these places, so they are carefully deleted off printed maps, live-stream digital maps, and from your GPS system!

New Island was deleted around 1940 from most maps worldwide, except those classified for military use. (see previous post, "You probably Know This, But...") This policy has continued into our age of digital mapping, mostly from prior demands of the military, but also at the request of the people of New Island.

In 1992, when the island became independent, Island residents voted to keep the island "off the map". They would rather not have airliners coming and going, cruise ships docking, or private planes and boats showing up unannounced. Secrecy can save a lot of headaches!
Posted by Unknown at 8:27 AM