You Probably Know This, But...

The Commonwealth of New Island is situated in the southern Indian Ocean, almost 1,000 miles west of Cape Leeuwin, Australia. I found this older satellite view of the island, quite by luck. The island has since been removed from these images, which brings up the story of the island's secretive history... 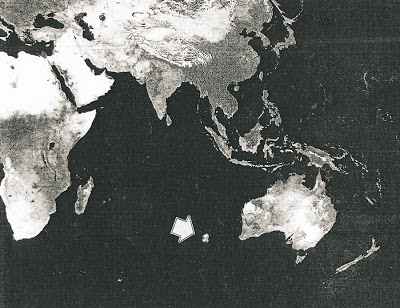 ﻿
The one and only satellite image I know of that includes New Island.


Beginning in 1799, New Island's first European residents were shipwrecked convicts bound from Britain to Australia. Once they began to thrive on the island, they really didn't want the British to find them again. Their stricken ship had been blown far to the north of the favored shipping routes, which is why the island had evaded discovery. Then quite by chance, Fabian von Bellingshausen, a Russian explorer, found the island in 1821 and immediately claimed it for Russia, which effectively kept the 400 or so English-Irish pioneers free from the British penal system.
The Russians, in turn, felt the island was nobody's business, and declared it off-limits to other countries. This was fine with the now-established shipwrecked natives. The Soviet Navy later intensified the island's secrecy during World War II and the Cold War, effectively cutting off all communication to the island except via channels authorized by Moscow.  In the late 1950s, the American CIA joined with the Soviet KGB in a covert "partnership" whereby the island was kept off all maps of the area. It seems that both sides at that time were using the island for strategic military purposes, including a submarine base (Soviet Navy) and a missile tracking station (CIA). Satellite imagery was later (and still is) modified to create the appearance of  deep blue water in that part of the Indian Ocean. But once in a while someone blinks and the island appears briefly!

The good news is, since 1992 when the Soviet Union fell, the island gained its independence, and it now welcomes travelers form all countries.    Next: New Island From Space!     ﻿
Posted by Unknown at 9:07 PM