Alan Gets Off the Train

Alan stepped off the train at a flag stop near Hazel, on the south end of Putney Bay, and walked up the hill to his house. His new-found friend, Bert, who was perched on his shoulder part of the way, flew off to a nearby tree, then to the house, as Alan approached it. Bert is smart, and is taking inventory of this place for any kind of predators, particularly house cats.
Though he is an architect, Alan bought this rather humble place (instead of designing it himself) some years ago...
"This little house is perfect; I have enough space to work on projects, and to relax, eat, sleep, and dream. I've fixed up the yard quite a bit, adding a trellis, a brick patio, and an in-ground hot pool overlooking the bay. But soon I'm going to build another hideaway on a beach far away from any roads and railways! I rather like toot-toot of the train's horn as it departs from the flag stop, but I don't like the traffic noise. What I like to hear is the faint roar of the bayshore surf and the high-pitched cries of the shore birds."
Or so he's been saying for some time now... 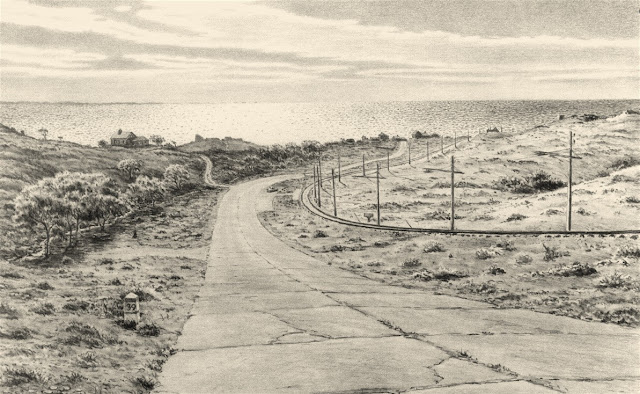 Alan's house is on the rise to the left.
It looks out on an endless expanse of ocean and sky, the sandy beach and surf, the distant dunes of  The Hook (visible at the far-left horizon), and the Hazelhurst Ruins, an Old People settlement of stone and mystery. Hazelhurst is one of several prehistoric settlements scattered over the island. 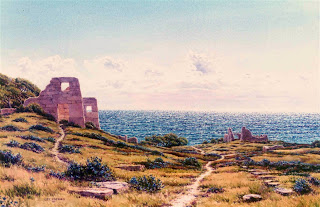 Who were the Old People, and where did they go? We don't know yet.
Posted by Unknown at 9:10 PM