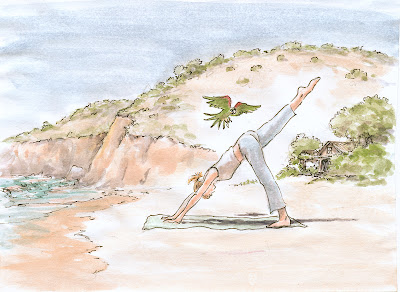 Bert comes out of nowhere, bites Samantha, and brings the other Samantha out of seclusion...
"OK," said Alan, "So Bert bit you..."
"Yes, then I screamed, and Samantha came running out, who is very brown from living without clothes, I guess. She asked me if I was all right, and everyone in the class was watching, and I wasn't all right; my thigh was still hurting where that parrot bit me...and I was so rattled I just had to leave that place..."

"Yeah, have you ever been there? It is way the heck in the boonies, up on the North Bight. A friend of mine told me I just had to experience the place. Well, it's a bit rustic, to say the least. Anyway, it took me two days to get down to Putney - I had to walk part of the way!"

"Well, he flew off, and I didn't see him again until I got to the Fillmore camp on the north Bight Path. Then he flew up to me and landed on my shoulder...pretty as can be. He screeched in my ear as I tried to fight him off , but he kept landing on my shoulder and my head until I gave up. Then he said 'Bert I am' as clear as day, so I said, 'Hi Bert.' He's been pretty good since, and didn't panic once all the way through the long bus ride, and the train station in Putney. But then people tried to touch him. His screeching scared the guy who runs Hopp's Store, and then bit that creepy kid in Davoo. Then, when I bought my ticket for the train, the agent warned me about taking him on board, and Bert, bobbing his head up and down, said, 'I'm such a good bird. Good bird, Good bird...' so the guy rolled his eyes, waved us on, and here we are."
Alan sips his grenade as Samantha stares at hers...

"So," Alan finally asked, "Why are you telling me all this?"

"Well, when I walked out a while ago, Bert wouldn't stop screeching, so I tossed him out the window in the next car, and I just feel terrible!"

Just then, Bert had caught up with the train (since it had stopped in Skegness), flew into the open window by their table, landing clumsily and bumping Alan's glass, and once again gave Alan the eye.
Posted by Unknown at 10:55 AM