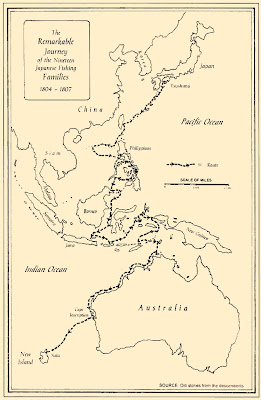 In 1807, just as the Europeans were settling much of New Island's south-western coasts and valleys, a group of fishing families from Tsushima in Southern Japan landed on the north-eastern coast of the island.

Here's their story, as handed down the generations:

Facing persecution for their Buddhist faith from the ruling Tokogawa clan, 19 families from the fishing town of Tsushima secretly built a huge raft, in sections, then lashed it together one moonlit night and set sail for a new home. About 109 men, women and children fled their native homeland in 1804 and wandered for three years among the islands of the
East China Sea
South China Sea
Celebes Sea
Banda Sea
and the Timor Sea
Until they hit Australia. They patiently hugged the inhospitable Australian coast and at Cape Inscription, finally decided to follow a "mysterious and delightful light" that led them west to New Island. Here they found their new Eden: a dramatic coastline with good rainfall, not too hot, lots of fish, and nooooobody there to give them grief.

They founded the town of Sata, and later a few outlying villages where they could harness streams for rice-paddy irrigation, and also fish. Along with rice and other native seeds, they brought timber bamboo along with them, which they allowed to grow wild on the hillsides.

They were completely isolated until 1819 when a group of young women (teenagers mostly) from Elsinore, a new farming tribe to the south, discovered them. After a wary period of shyness, the girls were treated well and soon learned about the delicious local seafood and rice dishes, the furo bath and the marvels of Japanese crafts and architecture--"all so different and all so delightful", the girls reported! Thus relations and trading were established. Japanese fishing and construction techniques were soon known over much of the island, and Buddhist practices, such as zen meditation, became popular--long before they were known in the West!

************************************
For 21 years, English-Irish convict women, ships' crew and guards; a band of settlers (for a while under the dubious Mr. Denby); and a few Japanese families enjoyed the freedom to create their own lifestyles and their own civilization, something completely unknown at this time. The women, inspired by stories about the "Old Religion" of 5,000 years ago, and other pagan and animist traditions, branched off into many tribes to farm and do things their own way.

But eventually one of the Great Powers would claim the island...and by luck it was Czarist Russia. If the British had claimed it, the convicts would have been shipped off to Australia, among other disruptions! If it were the Spanish, French, Portuguese or the Dutch, all with ships crossing the Indian Ocean more and more frequently, who knows how the island would have fared, but the delicate social experiments would likely have been crushed.

Next time: The Russians