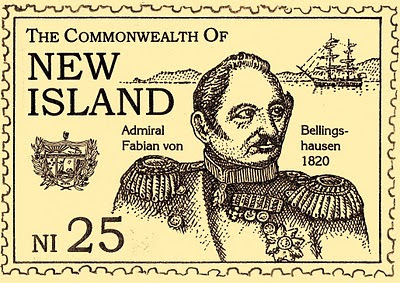 The Russians claimed New Island in 1820.

Czar Alexander I had entered the race to colonize distant lands far later than the rest of Europe. In 1819 he sent Fabian von Bellingshausen on an expedition to circumnavigate Antarctica as well as to chart the last 'unknown' regions of the Southern Ocean. In April of 1820, Bellingshausen headed north from Antarctic waters to Java, to wait out the approaching southern winter. En route he encountered a "...land of a hilly nature with smokes and other signs of settlement."

A cautious man, Capt. B. decided to sail around the island first, creating New Island's first coastal chart along the way. He finally ventured a landing at Old Bay, on the island's southern shore and near where he first sighted the island. Waiting for him (his progress had been closely watched) was a large group of fair-skinned, English-speaking and rustically-clad locals.

And so many women!

By luck, a Russian deck officer spoke enough English to initiate a conversation, and what a conversation! The Russians were immediately impressed by the level of civilization these shipwrecked female convicts had accomplished! The also knew that to maintain any hope of holding on to this outpost from the grasp of the rest of Europe, they would need allies.

After two weeks of negotiations with settlement Elders, a unique agreement was reached: Russia would declare the island a sovereign Russian possession, thus keeping it out of the hands of other European powers. The islanders, in turn, would allow the Russians to use the island's natural harbors as port facilities, and they would also help defend the island for Russia. Beyond this, the islanders and their way of life would be left alone: no Russian police force, no missionaries, and no interference in islander affairs! Russian settlement would be confined to a surveyed area near the two port sites.

The Elders were very firm on this and Captain Bellingshausen signed to it.

Next: Russian occupation, and some rough times.
Posted by Unknown at 9:50 PM