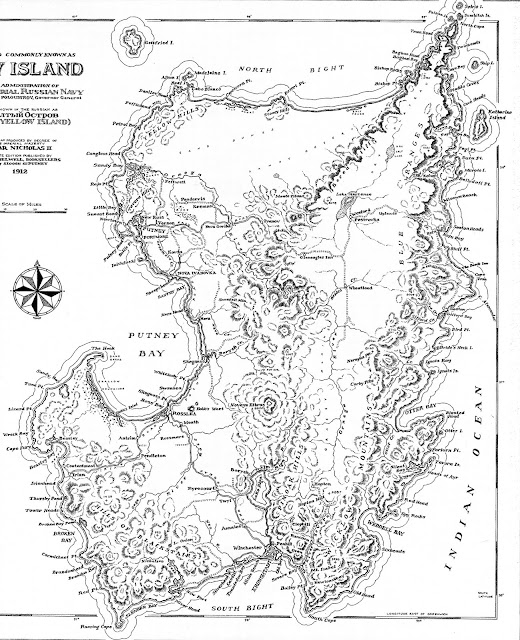 A portion of the first comprehensive
map of New Island, copied from the
original Russian Survey map of 1912,and redrawn in English.

In 1992, when the Soviet Union collapsed, the newly formed Russian Federation found itself the owner of the unacknowledged island. It no longer had strategic value and was expensive to maintain as a colony, so Russia arranged a sale to the island Elders. For a 20-year promissory quota of fish and wool, plus an undisclosed amount of gold, the islanders bought their independence! ( The gold was believed to have been acquired from the wreck of the Spanish merchantman Juan Alvarez in 1830, and hoarded in a cave.)

On April 13, the island's name was officially changed to The Commonwealth of New Island, and the celebrations lasted for days.


New Island's Elders had long ruled the towns and settlements not directly under Russian administration. They used local governing practices more or less laid down by Cecelia, Captain Hayes, Roger Putney and others, but were unprepared to set up a nationwide government, let alone interact with the outside world as a sovereign state!