The Russian Occupation of the Yellow Island 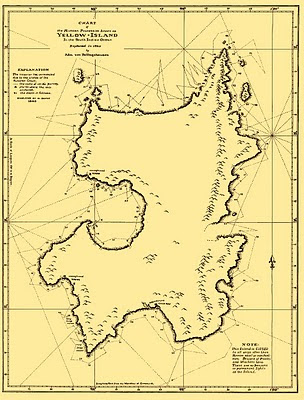 This is an English-version reproduction of the original chart
drafted during Admiral Bellingshausen's circumnavigation
of the Yellow Island. The name came from the abundant
wildflowers frequently observed from the ship.

The Russians occupied our island until 1992.

Once the Czar announced the island's existence as a Russian colony, other nations, pirates and privateers soon began to test its defenses. The islanders proved their homegrown defense capabilities by setting fire to anchored ships while foreign raiding parties tried to overrun settlements. The Czar thwarted an extradition attempt by the British in 1825 by threatening to expose a certain delicate situation between the Russian and British royal families...

Eventually the world accepted the fact that Russia owned the island.

Czar Alexander wanted the island to pay its way and demanded quotas of wheat and wool, which Bellingshausen had reported were being produced by the settlers. The Czar's colonial commanders were pragmatic enough to realize that forced labor would likely bring on a native uprising, thus they agreed to a barter system whereby Russian finished goods would be traded for the island's produce. The Russian administrators, laborers and contractors who had contact with the islanders were usually intimidated by the women's' wild, intense gaze and their 'natural' clothing styles. These newcomers really didn't understand what the islanders were up to, nor did they want to, so they simply left them alone.

The abundant offshore whales and sea otters were not so lucky, as they were savagely hunted for their oil and fur. Beginning in 1830, Russian whaling operations were set up near Kronstadt, and Russian ships hunted down the region's whales, seals and otters until they were very near to extinction. This disturbed the islanders greatly as the otters were a sacred animal, and the stench of the offal dumped into Kronstadt Bay was nearly suffocating at times. By 1902 the entire area was fished out and the operations closed down, but you can still see the bleached bones littering the shoreline north of the Marketside district.

The southeastern forests were also a target for export. In the late 1880's Russian loggers cut down a considerable amount of local timber for export, especially in the more accessible areas east of Kronstadt. Fortunately, the Revolution interrupted this practice before the major mountain forests were cut. Some tree farms were developed in the 1920's, and New Islanders still practice the methods they learned from the Russian foresters.

After 1900 Czar Nicholas began to see the island as a strategic naval base, and in 1906 assigned Governor General Alexander Poloustrov the post of colonial commander. Poloustrov was given the task and a healthy budget to build roads, railways, hydroelectric plants, deep-water ports and other infrastructure to make it a useful outpost for the military, and as a possible resort for the Russian elite. Poloustrov hired Polish and Russian laborers to build these projects, which fortunately neared completion when the Revolution finally caught up with the island around 1920.

Next: The island disappears!