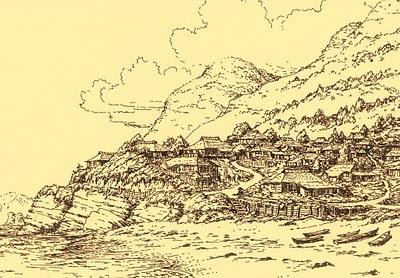 Sata, a wayside fishing village on New Island's
northeastern coast, has changed little in 200 years.
It is constructed exclusively with
traditional Japanese methods and materials,
including bamboo brought on the initial
voyage here from southern Japan in 1807.
New Island was uninhabited when the first modern outsiders arrived, but ancient ruins indicate someone had definitely lived here in the past. The mystery of who these people were, and what happened to them, has always provided a subtle undercurrent to New Island's culture.

Irish and English rural traditions provided the early bedrock of the island's culture, but with a matriarchal twist that reverted to very old nature-oriented traditions. Wiccan celebrations were revived from the old stories, and also influenced by the harmonic buzz and the Otter visits. Multi-family groups began raising kids together and calling themselves tribes. Farming and cottage-manufacturing grew cooperatively in these same tribe-settlements. Work was important for survival, but was not considered secondary to singing, dancing under the moon, or hugging!

Other peoples have made their mark on New Island as well. Most notable are the Japanese Fishing Families who arrived on a huge home-made raft in 1807. They settled the then-uninhabited northeastern coast; planted rice and bamboo and eventually built several villages from Kofu Bay north to Cave Heads. These families and their descendants have generously shared their Japanese traditions over the years. Buddhism, rice production, the furo bath, house construction, traditional Japanese crafts and green tea have all become part of New Island's culture.

The Russians left their mark of course, though surprisingly little in the way of culture. The island simply did not attract Russian homesteaders as was hoped, but a few have settled in the Russian-speaking neighborhoods of New Russ, Gorika and Vernon near Putney; and Old Bay-Penhill near Victoria Harbor. Russian-built roads, the railways, dams, government buildings, clinics, a few resorts, abandoned military installations (nearly all recycled now) and isolated mansions are their legacy.

A few other nationalities have found their way to New Island. Some Polish construction workers who contracted to help build roads had stayed on, and their descendants live mostly along the Putney Bay Shore. About 400 current residents can trace their Spanish ancestry back to about 25 survivors of the wreck of the Juan Alvarez in 1833. Another 140 have traced their ancestry to the six surviving American sailors of the Dunrovin whaling ship incident of 1840. (The Dunrovin, an American whaling ship was "suspiciously sunk" by a Russian whaler off the island's southern coast. The exact circumstances remain a mystery.)

A few Australians, Asians, Africans, Latin Americans and Europeans have also wandered ashore over the years and all have (eventually) been welcomed.

Email ThisBlogThis!Share to TwitterShare to FacebookShare to Pinterest
Labels: Culture