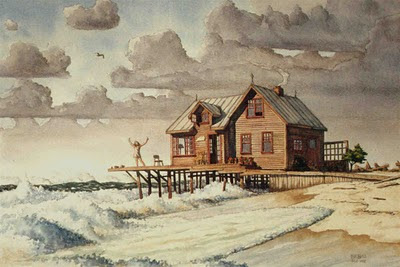 Some New Islanders literally live on The Very Edge
and sometimes they dance in storms.
In those first years of settlement, women not only outnumbered men by about 4 to 1, but they became a powerful force in building the island's cultural infrastructure.

When the first year ended it became clear to the island's 500-odd survivors that they were going to stay put here for the long haul. Talk of new ideas about family structure began almost upon arrival, when the natural urges of males and females resulted in numerous under-the-fence assignations and inevitable pregnancies!

Cecelia O'Hassett and several others, with the consent of Capt. Hayes (that Enlightenment experimenter) set up marriage rules allowing unions with more than one wife per husband, and also with any number of wives and no 'official' husbands at all. These new family-units could legally raise kids, enter into legal contracts, and generally be given protection under English Law. Though some brought up the sanctity of marriage within the Church, most everyone believed they would do better be redefining the whole institution. And so they did. By the way, Captain Hayes performed many marriage ceremonies with Christian rites for those who so desired. (He was an Anglican but eventually affiliated himself with the Old Way.)

As the ratio of women to men became more balanced over succeeding generations, traditional one-wife, one-husband marriages became more common, especially in the large towns and suburbs. (yes, there are a few 'suburbs' on the island!) But in many of the back-country settlements, the Old Way marriages are still practiced.

*********************************
Tribes on New Island are a big part of the social structure. They can be defined as close-knit groups of several families which have banded together for some specific purpose. Nearly every tribe produces or provides some specific product or service for its income, which is usually defined in their Charter of Intent issued by the Commonwealth. Subsistence tribes, once the majority, rely entirely on their own food and craft production, build their own shelters from materials at hand, trade very little with the rest of the island, and have no Charter. They seem to enjoy their isolation!

Tribes are common in the country and in town. Many of the isolated settlements shown on the map are tribes of roughly 150 members, which can be identified by the commons-yards and buildings surrounded by small homes. Within the neighborhoods of the larger towns, the tribes are smaller, perhaps 50 members, and have laid out their own compounds within a city block or two. These are often intricate warrens of narrow lanes that can enchant the wanderer!

Tribe members decide on the tribe's management structure, such as work hours, who does what, and pay. Profits are shared or reinvested into the tribe business. Some tribes are better at this than others, so the Ministry of Commerce is available to help.

If a tribe grows to more than 150 members, it will often split off and establish a new 'daughter' tribe or members will scatter to other tribes. Young tribe members often take off at about age 16. (see The Great Walk on a later post)