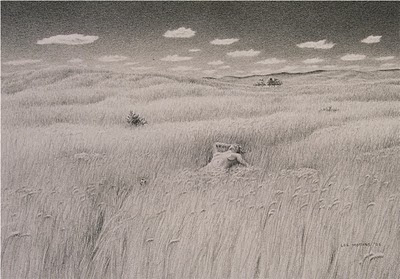 New Islanders feel blessed with a mild climate and
adequate rains. They value their time to
play, rest and simply 'be' withe nature.
And they are aware of its fragility.

The women-convicts could only thank nature for their fortune.

Since the women far outnumbered the men (and female energy was further strengthened by he wreck of the Gloster in 1803) Nature was suddenly seen as a redeemer, and old women recounted stories of Nature-worship practices, long suppressed by the Catholic church and others as witchcraft or simple paganism. Captain Hayes and Cecelia O'hassett (along with the nature of sexual attraction) persuaded most of the reluctant guards and ships' crew to go along with a new form of civilization being offered by the women. Captain Hayes' reasoning was also influenced by the currently-in-vogue Age of Enlightenment.

It became very important to honor nature in religious practices, government, land use, and what we now generally call sustainability.
Posted by Unknown at 10:50 AM