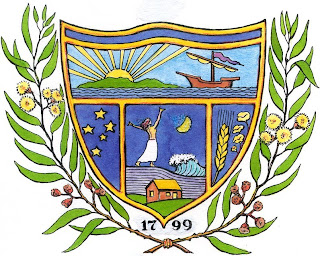 This is New Island's Coat-of-Arms, adopted in 1993 soon after
independence. Symbolized within the shield are the
island's discovery, location, abundance, home-land,
joy-of-being, ocean energy and year-of-founding,surrounded by a eucalyptus-branch laurel.


Once New Island's settlements began to grow it became clear that some sort of island-wide representative government was needed.

James Denby, the regrettable martinet who founded New London (later Putney) came close to handing New Island over to the British, and probably should be credited with accelerating the government's creation. Denby's free-settler followers, who were grateful after Roger Putney's gift of stickyballs (see the Stickyball Incident), joined Captain Hayes, Roger and several early Elders to form an island-wide government, and to prevent Denby from sailing to Australia, thus alerting the British navy! The Japanese also were willing to participate, for defense reasons mostly, as long as they could retain their village-life and customs. The Russians, under agreement, allowed New Islanders their autonomy in trade for military allegiance.

So over many years New island's government emerged as a laizzes-faire, free-market, co-operative partnership among all New Islanders. The essence of it is this: every resident is essentially a partner and has certain rights such as freedom of speech, press and assembly; and certain responsibilities such as respect for nature and to 'Do Unto Others as You would Have Them Do Unto You'. Failure here could result in permanent exile.

After independence in 1992, the Elders mandated that the..."Government shall be as non-intrusive as possible, yet shall exist to assure an adequate infrastructure, preserve the social order, and provide for national defense. " The Commonwealth of New Island has been thus set up with the following structure:

Legislative Arm: Youngers and Elders
Neighborhoods, tribes and small outlying settlements appoint Youngers who in turn elect and advise the nation's Elders. The Youngers meet regularly to advise the regional Elder, who in turn meets at the month-long Council of Elders. The Council is New Island's legislative body that meets every April and October on Government Hill, the onetime Russian colonial headquarters outside Victoria harbor. Elders serve six-year terms but only one-third are up for election at every two-year interval. Youngers and Elders can be re-elected indefinitely.

Executive Arm: The Ministries
Trade, Transportation, Commerce, Energy, Education, Caring, Antiquities and The Arts are the Commonwealth departments or ministries. The Council of Elders appoints the Ministers, whose actions are closely watched by the Elders. The Ministry of Trade, which oversees tourism and residency is considered the most powerful. Since there is no Prime minister or President, the Minister of Trade is called upon to represent New Island at international summits. Currently, Mr. Wainwright Stevens is our Minister of Trade. Ministers may hold their appointments indefinitely, but can be voted out by a majority of the Elders.

Judicial Arm: The High Court
The High Court is made up of seven Jurists-Major and meets in Victoria Harbor to hear all cases that cannot be resolved locally, and that usually have island-wide implications. Jurists-Minor, or more commonly, Jurists, hear both civil and criminal cases in the local courts. The Constables, besides enforcing the laws, also help settle minor arguments on the spot if possible.

Police and Military:
New Island has no national police entity or military force except the Commonwealth Coast Guard. The CCG emerged as a coastal guerrilla force in the early 1800's and also proved effective in helping the Russians maintain ownership of the island, at least in the days of wooden ships. With its fleet of modern patrol vessels and motorized surf boats, the CCG is now charged with helping distressed ships, small boats and swimmers. It also monitors ocean and shoreline pollution and watches for piracy, overfishing or other shenanigans within the island's 12-mile limit.

That's government in a nutshell!