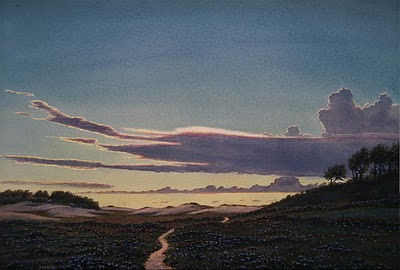 This is the landscape that greeted the first settlers
on the island: quiet and green and
literally buzzing with the promise
of redemption.

Nature had an early influence...

Imagine you are camping out forever on a completely unknown island far away from home with only a few farming and construction tools, some seeds, chickens and pigs and maybe a few 'how-to' books circa 1799.

Also imagine you are likely illiterate (someone had to read the how-to books to you) and had been living a life of desperate poverty before being exiled off the edge of the known world by the law. You are also Irish or English and female with no rights at all as you were thrown into a floating prison for weeks on end with other rowdy, angry and often diseased shipmates before you were dumped here in a storm that you are amazed you survived!

Finally exhausted, you sleep among sand dunes out of the wind, and you are still cold and wet, but the next day the sun comes up warm, the wind has died, and you and your mates do something completely unheard of: without a word on some mysterious cue, you all throw off your grimy wet clothes and enjoy the warm sun for the first time! (Well, there is a reason: your clothes are filthy from the voyage, and you've found a small stream in which to wash them, and yourselves...) But you can't help but sense a renewal here!

You and your mates are allowed to explore without a guard escort. (Where could you escape to anyway?) Away from the camp, you find no sign of hostile natives (luckily) but once inland from the roar of the surf, you are amazed at how quiet the place is. With few trees, the land is silent save for the twittering of some birds; and then you hear that hum... It seems to emanate from nowhere and everywhere; it has no audible source. It is pleasing, though, and a deeply soothing sound like the buzz of a million bees.

The older women say the hum is the Goddess who has brought the storm, the warm sun and this island to take care of us all; and you think there might be something to this idea. Indeed, nearly everyone here has realized that nature can be all-powerful and godlike, yet quite different from the 'traditional' god back home, the god invoked by the English churches and courts to help get rid of you!

Yes, you are a female convict that was being 'transported' to Australia from England to serve a seven year sentence of hard labor, and you got lucky!